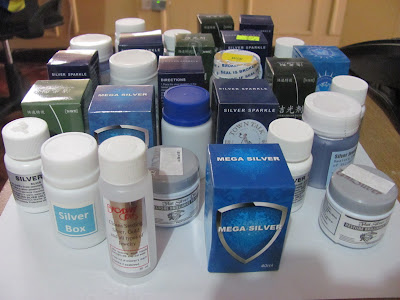 Quezon City – Disturbed by the continuing trend of suicides using banned silver jewelry cleaners, the EcoWaste Coalition, a toxic watchdog, conducted test buys of the product in seven malls in the metro on December 12 and 14. The coalition found that the “suicide cleaner," which Rea Patricio, 14, of Navotas City fatally ingested last week, could still be easily found in stores despite the ban. Cyanide, a lethal ingredient found in some silver cleaners, can kill instantly even in small amounts.
The coalition’s AlerToxic Patrol managed to buy with receipts 30 unlabelled and/or unregistered silver cleaning solutions in some jewelry and watch stores in the following malls: Grand Central Mall (in 5 stores) and Victory Central Mall (4) in Caloocan City; Guadalupe Shopping Center (2) in Makati City; Manila City Plaza (2) in Quiapo, Manila; Starmall Alabang (11) in Muntinlupa City, and Farmer’s Plaza (4) and SM North (2) in Quezon City.
“We find it alarming that, despite a joint ban from the DOH and the DENR, unlabelled and unregistered silver jewelry cleaners are so easily available to anyone with the cash to buy them,” said Thony Dizon, coordinator for the EcoWaste Coalition’s Project PROTECT (People Responding and Organizing against Toxic Chemical Threats). “Rea Patricio’s suicide is only the latest in a chain of deaths involving silver cleaners. How many more people need to die before this poison is finally banished from the market?”
The University of the Philippines-National Poison Management and Poison Control Center at the Philippine General Hospital and the East Avenue Medical Center Poison Control Unit consider silver jewelry cleaning agents as one of the top three toxicants among patients admitted for the past two years. They were also the third most commonly swallowed poison among children.
A string of suicides and the accidental death last July of a one-year-old victim from silver cleaner poisoning prompted the Department of Health (DOH) and the Department of Environment and Natural Resources (DENR), with input from the EcoWaste Coalition, to issue a joint advisory against the sale of toxic silver cleaners.
According to the joint advisory, “laboratory analysis of samples of silver cleaners show elevated levels of cyanide clearly posing imminent danger or even death to humans, particularly when accidentally or deliberately ingested.”
The joint advisory emphasized that penalties would be imposed on importers, retailers and commercial establishments selling and dispensing unregistered and unlabeled silver cleaners. However, the results of the coalition’s market monitoring have shown that these items are still rampant in the market.
“Government regulators should exercise utmost vigilance in enforcing strict compliance of the ban on death-causing jewelry cleaners,” said Dr. Leah Primitiva Samaco-Paquiz, secretary of the EcoWaste Coalition. “Offenders must be punished to the full extent of the law. Ito ay kailangang gawin para hindi pamarisan."
The EcoWaste Coalition called for the aggressive enforcement of the joint ban and for government regulators to cut off the country’s supply chain to the poisonous product.
“Cutting the supply off at the source is the only way to ensure that this ‘suicide cleaner’ is removed from the market,” said Dizon. “Manufacturers and retailers have no business selling a highly poisonous substance with such impunity.”
-end-
Link to the article re Rea Patricio's suicidal death due to the ingestion of silver jewelry cleaner:
http://www.philstar.com/Article.aspx?articleId=637492&publicationSubCategoryId=93
Posted by EcoWaste Coalition at Thursday, December 16, 2010