Quezon City - Barely two weeks to go before Christmas Day, and already the annual holiday frenzy has grown to epic proportions. Unfortunately, this is also the time when the country’s use of disposable goods such as Styrofoam and other polystyrene containers and plastic spoons and forks rises alarmingly.

In a timely eco-plea called “Magplato, Di Styro”, the EcoWaste Coalition, a waste and pollution watchdog, urged all consumers to keep their use of single-use party wares to a minimum in a bid to reduce the country’s “holitrash” (holiday trash).

“’Holitrash’ is one of the biggest contributors to the mountains of garbage that the country has to contend with,” said Roy Alvarez, president of the EcoWaste Coalition. “We may be having the time of our lives running from one party to the next, but the environment will certainly pay the price for our merriment.”

There really is no need to use disposable items in Christmas parties when clearly there are many alternatives out there,“ continued Alvarez. 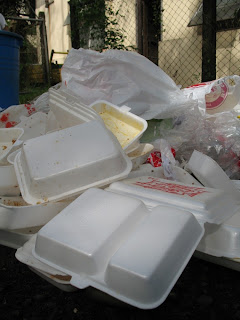 A waste audit of the heavily-polluted Manila Bay conducted last 28 November by the Global Alliance for Incinerator Alternatives, Greenpeace and the EcoWaste Coalition showed that 75.55% of the 728 liters of waste collected from the area was composed of plastic discards. 20.74% of these plastic discards were composed of Styrofoam food and beverage containers.

“The amount of Styrofoam discards floating in the bay has more than tripled since the last waste survey we did in 2006. Back then, polystyrene plastic made up 5% of the trash collected,” observed Gigie Cruz of the EcoWaste Coalition’s Task Force Plastics.

"While there are ongoing government as well as private sector initiatives to cut plastic bag consumption, not much is being done to control the wild use of polystyrene containers and other disposable cutlery,” said Cruz.

The coalition suggested using regular chinaware, metal cutlery, and glass that can be washed and used over and over again. Using banana leaves laid on reusable wicker or bamboo woven plates can also help reduce the amount of plastic discards that we generate this season.

For office parties, the EcoWaste Coalition suggested asking employees to bring their own sets of plates and utensils. Companies could also set aside a small budget for stocking their office pantries with reusable cutlery instead of issuing disposables for everyday use.

The money saved from buying disposables, according to the coalition, could instead go towards rewarding green employees. It could also be used to provide food for the less fortunate, such as the itinerant and dumpsite-based waste pickers, as part of a corporate social responsibility program.

The coalition also exhorted consumers to bring their own containers when buying cooked food in bulk, or request that items be packaged using biodegradable materials.

“Let’s not lose sight of the bigger environmental picture, even in the midst of our holiday activities,” the EcoWaste Coalition pointed out. “A little creativity can go a long way to making this a greener and Earth-friendly Christmas for all of us.”