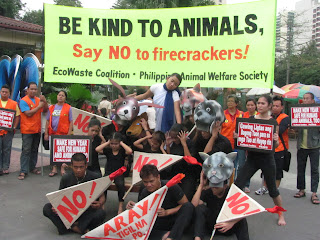 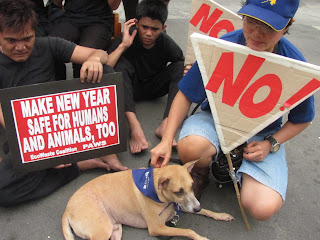 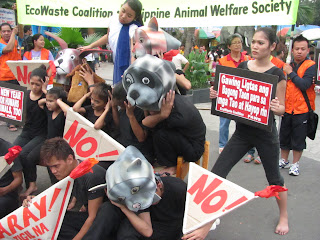 An environmental watchdog and an animal welfare group have teamed up to remind citizens to be kind to our animal friends and protect them from the harmful noise and fumes of firecrackers and other pyrotechnics during the New Year celebrations.

The EcoWaste Coalition and the Philippine Animal Welfare Society (PAWS) jointly called on Filipinos to shun firecrackers and act responsibly towards animals in an event held outside the Manila Zoo.

To dramatize the traumatic effects of firecrackers to animals, youth members of Maskara-Green Stage Filipinas acted out a skit that ended with a scene showing performers donning cat and dog headgears hiding under the bed because of the frightening booms and bangs during the warlike New Year revelries.

“To us humans the noise of firecrackers can be an inconvenience, but to animals – such as dogs and cats – with highly sensitive hearing, that same noise can be the equivalent of a cannon going off near them,” said Aileen Lucero of the EcoWaste Coalition. “Magnify that by the amount of firecrackers all going off at once on New Year’s Eve, and imagine the mega-torture that the day brings to them.”

“This New Year’s Eve, please do not use firecrackers or firearms,” said Elsie Araneta, director of PAWS. “The explosive and unpredictable bangs, the choking fumes, and the bright displays of light hurt the highly sensitive ears, powerful noses, and keen eyesight of dogs and truly frighten them.”

“90% of the calls that PAWS gets during the days approaching New Year and right after the festivities are about animals lost because they were spooked by firecrackers or those who were injured due to firecrackers,” she pointed out.

Animals evolved with highly sensitive hearing in order to survive in the wild. While they do not need this ability as much in the urban jungle, it is still part of their systems. As their caretakers, it is imperative that we be more sensitive to their needs as well as more conscious of our responsibility to protect their rights while they are under our care, the groups said.

The groups also bemoaned the fact that, while firecrackers have already been proven to be detrimental to human and environmental health due to the danger of injuries and contamination from the toxic emissions, very little is written about their impacts on the health of the metro’s animal population.

“Firecracker-related injuries and deaths among humans have been well monitored and documented by the government in the past decades,” said Lucero. “We commend them for their efforts, but we would also like to see them exercising the same vigilance on behalf of animals.”

PAWS and members of the EcoWaste Coalition who have pet cats and dogs have come up with some tips for helping animals survive the firecracker noise and injuries during the New Year’s Eve celebrations:

1. Persuade members of your household to make your home a “no firecracker” zone.

5. Manage the environment so it is as relaxing as possible and as unstressful as you can make it.

6. Provide your pet with a safe place to take temporary refuge. If possible, allow your pet to stay in a quiet room such as a bedroom.

7. Close the windows, put the curtains down and play a relaxing music to neutralize the noise from the outside to help your pets feel secure.

9. Do not yell or laugh at your pet when she/he is cowering or shaking in fear. This is a natural response to a threat that they do not understand and cannot avoid.

The above tips were from PAWS and from EcoWaste Coalition's partners in Arugaan, Global Alliance for Incinerator Alternatives, Greenpeace, Health Care Without Harm, Philippine Greens and Sining Yapak.

Instead of firecrackers and fireworks, both the EcoWaste Coaliton and PAWS suggest alternative ways of ushering the New Year sans explosive noise and dirty emissions that are harmful to humans and to animals, too.