Environmentalists Back Precautionary Ban on Firecrackers in Makati City 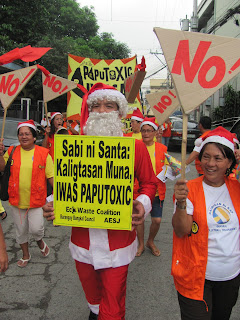 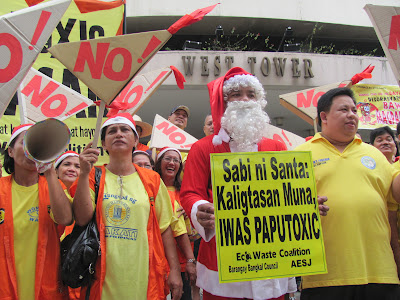 In support of the firecracker ban enacted by the Makati City government in the area near a damaged petroleum pipeline, the EcoWaste Coalition, a waste and pollution watchdog, took to the streets of Barangay Bangkal to call on citizens to avoid toxic and dangerous firecrackers this holiday season.

Combined representatives of the EcoWaste Coalition, Advocates for Environmental and Social Justice, and the Barangay Council joined the parade which was led by a man dressed as Santa Claus. Santa Claus held a friendly reminder that said “Sabi ni Santa: Kaligtasan Muna, Iwas-Paputoxic.” Participants also carried 10 oversized mock triangulos bearing the word “NO!” while blowing whistles to get the attention of passersby and bystanders.

“Firecrackers are the last thing anyone needs to celebrate the season, especially since these have already been proven to be toxic to humans, animals and the environment,” said Aileen Lucero of the EcoWaste Coalition’s Project PROTECT (People Responding and Organizing against Toxic Chemical Threats).

“They’re even more of a threat in Makati City, especially since the First Philippine Industrial Corporation (FPIC) has yet to complete the remediation work and the clean up of West Tower and surrounding villages affected by the massive spill underneath the ground. We therefore laud and support the precautionary ban on firecrackers adopted by the City Council and signed by Mayor Jun-Jun Binay,” she added.

The Makati City Council approved last December 7 City Ordinance 2010-A-020 banning the sale, manufacture, storage, possession or use of all types of firecrackers, pyrotechnic devices, and other explosive materials in the areas of Bangkal, Pio Del Pilar, and Magallanes. The ordinance was issued amidst fears of fire starting in these barangays which are traversed by the FPIC pipeline.

“It’s hard enough that we have to worry about toxic fumes from firecrackers every year,” said Barangay Bangkal Chair Fermin Eusebio. “It’s outrageous to think that we have to add the very real possibility of starting destructive fires in the city to our list of woes.”

“One misplaced firecracker thrown by a careless reveler could place hundreds of lives in danger,” said Eusebio.

“It’s always better to be safe than sorry, especially during the holidays,” said Eusebio. “We call on all concerned citizens to abide by the city ordinance and to make sure their neighbors do so as well.”

The EcoWaste Coalition agrees. “Let’s not forget the welfare of our fellows this Christmas,” said Lucero. “A safe and merry holiday celebration is the most precious gift that we can give to everyone this year. Let’s not lose sight of that in our excitement over the season.”

Apart from the threat of explosion and fire due to the damaged pipeline, the EcoWaste Coalition is also concerned about the toxic burden that firecrackers and other pyrotechnics release into the atmosphere.

Citing information provided by the Department of Health, the coalition said these devices generate many pollutants, including carbon dioxide, carbon monoxide, sulfur compounds, particulate matter, metal oxides and organic compounds, when burned. These pose health risks to infants and young children and those with respiratory and cardiovascular diseases.

“Why do we need to use these dangerous and toxic items when there are more creative alternatives available?” asked Lucero. “Is it really worth putting our families’ lives in danger for a few short-lived bursts of light in the sky?”

Instead of firecrackers, fireworks and similar devices, the EcoWaste Coalition is promoting the use of substitute noisemakers that will not cause injuries, fire and pollution.

For example, shakers could be made by filling discarded soap and toothpaste boxes with pebbles. Beverage cans and plastic bottles could also be used for this purpose.

Maracas can be made from tin cans, while flattened metal bottle caps could be strung together to create a makeshift tambourine. Pots and pans could also be used as cymbals and drums. Toy horns (torotot) could also be used to make some noise.