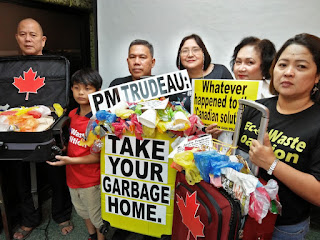 Civil society groups from the environmental and labor sectors welcomed the latest move by the Senate to address the unsettled Canadian garbage dumping issue weeks after Prime Minister Justin Trudeau announced “it is now theoretically possible to get (the illegal garbage shipments) back.”

The said groups are intervenors in Criminal Case No. 143-11191 being heard at the sala of Judge Tita Bughao-Alisuag of the Regional Trial Court of Manila against Canadian trash importer Adelfa Eduardo and customs broker Sherjun Saldon for violation of R.A. 6969, or the Toxic Substances and Hazardous and Nuclear Wastes Control Act.

Pimentel on Monday filed Senate Resolution 553, stating that “considering the monumental consequences of allowing Canadian garbage to remain in the country, it behooves the Senate, in consonance with its mandate under the Constitution, to conduct an inquiry, in aid of legislation, to determine whether there are sufficient laws restricting the indiscriminate entry and dumping of solid waste and other forms of harmful trash into the Philippines and to formulate laws imposing high penalties for the introduction into the country of all forms of trash.”

“Sen. Pimentel’s proposal to conduct an inquiry in aid of legislation is exceedingly timely and should merit the support from all Senators regardless of their political affiliations.  We expect the Senate Committee on Environment and Natural Resources, chaired by Sen. Cynthia Villar, to convene the first hearing in January next year as the current session is about to adjourn soon.  We look forward to an expedited process as the same committee, then chaired by Sen. Chiz Escudero, had already tackled the issue at a hearing conducted in 2015,”  said Dr. Leah Paquiz, Ang Nars Partylist representative to the last Congress.

“We welcome the probe being sought by the Senate President as this would assist in analyzing the gaps in current laws and regulations that made it possible for the illegal trash shipments to enter our ports and even overstay despite a court order to send them back.  More importantly, it will help in identifying corrective measures that must be introduced and promulgated to shield our nation from the adverse impacts of the unlawful waste trade to public health and the environment,” said Aileen Lucero, National Coordinator, EcoWaste Coalition.

“The outcome of the planned inquiry should put a lid on the entry on problematic waste imports into the in the guise of recycling, which has become a convenient excuse for dumping.  Hope the Senators will join us in pushing for the country’s ratification of the Basel Ban Amendment to bar the entry of hazardous wastes in our territory for disposal and so-called recycling,” said Froilan Grate, Executive Director, GAIA-Philippines.

“The inquiry, we hope, will generate concrete results that will help strengthen frontline agencies such as the Bureau of Customs and the Environmental Management Bureau in performing their strategic responsibilities toward safeguarding our country and our workers  from the transboundary movement of proscribed wastes,” said Annie Geron, President, PSLINK.

The groups pledged to participate in the proposed Senate inquiry and support its important work in line with the state policy “to protect and advance the right of the people to a balanced and healthful ecology.”

“The Senate inquiry should create enough noise that will put additional pressure on Prime Minister Trudeau and his government to take back their trash now.  As there is no guarantee that the ‘theoretical possibility’ he was talking about last month was for real or not, we call upon all sectors to remain vigilant and assert our sovereign right not be treated as Canada’s dumpsite,” the groups said.