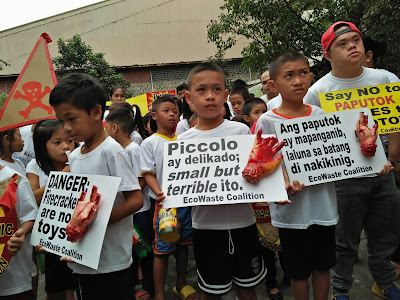 As the festive celebration of the New Year nears, the EcoWaste Coalition urged the country’s Barangay and Sangguniang Kabataan officials to comb streets within their jurisdiction to stop the sale of Piccolo and other banned firecrackers.

“We can win the war versus Piccolo, the biggest culprit behind most firecracker-related injuries, if barangay and SK leaders, together with the police force, will take action against recalcitrant dealers,” said Aileen Lucero, National Coordinator, EcoWaste Coalition.

“Local barangay officials are in a strategic position to monitor and halt the sale of Piccolo and other prohibited firecrackers like Atomic Bomb Triangulo, Goodbye Earth, Judas’ Belt, Super Lolo, Whistle Bomb and Watusi in areas under their care and jurisdiction,” she pointed out.

“We therefore urge the barangay and youth councils to spend the next few days combing the streets to apprehend sari-sari store owners and others engaged in the unlawful sale of banned firecrackers, including those that sell firecrackers to minors,” she said.

Republic Act 7183, a law regulating and controlling the manufacture, sale, distribution and use of firecrackers and other pyrotechnic devices, penalizes violators with a fine of not less than P20,000 but not more than P30,000, or imprisonment from six months to one year, or both such fine and jail term.

For a safer and cleaner celebration of the New Year, the EcoWaste Coalition appealed to the public to take the following “don’ts” to heart:

Tomorrow, December 29, the EcoWaste Coalition will stage another “Iwas Paputoxic” event in collaboration with the Philippine Animal Welfare Society to draw attention to the adverse effects of firecrackers and fireworks to cats and dogs.

The EcoWaste Coalition is civil society partner of the Department of Health-led "Iwas Paputok" campaign involving the Philippine National Police,  the Bureau of Fire Protection and other agencies.