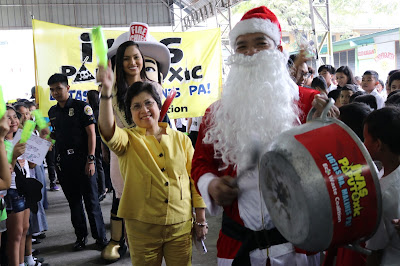 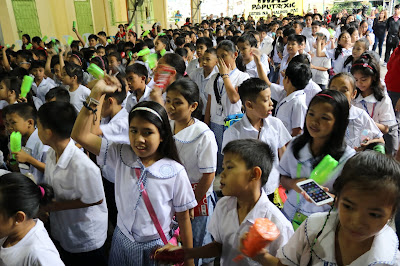 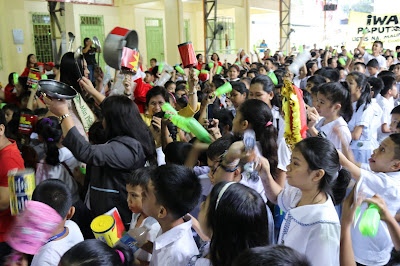 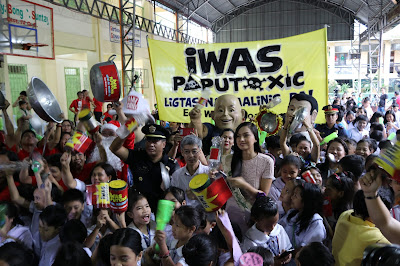 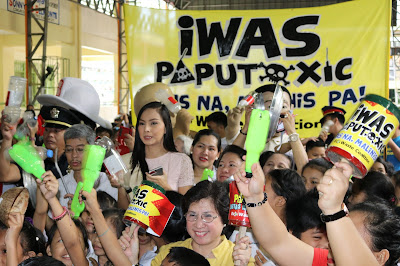 This was the resounding plea of the EcoWaste Coalition at the launch of its annual campaign to encourage the general public to greet the New Year in a safe and cleaner manner sans injurious and noxious firecrackers.

Held at the Marcelo H. Del Pilar Elementary School in Quezon City, the “Iwas Paputoxic” event drew the lively participation of some 1,000 students and their teachers who manifested their support to a firecracker-free and waste-free revelry.

Led by school principal Mrs. Aireen Dulfo, Miss Philippines Eco-Tourism Vanessa Mae Castillo  and guests from the health and police departments, the school assembly showed a fun way of celebrating the New Year through the use of eco-friendly and safe noisemakers that will not pose danger to life, limb, property and the environment.

“Year in and year out, we usher in the New Year tallying the number of firecracker blast victims.  We hope it will be a totally different scenario this time with the implementation of Executive Order No. 28, which provides for stricter regulation and control of the use of firecrackers and other pyrotechnic devices,” said Aileen Lucero, National Coordinator, EcoWaste Coalition.

“We urge everyone to rally behind the energized multi-sectoral campaign led by the Department of Health to achieve zero firecracker-related injuries as the nation welcomes 2018, hopefully, with less toxic smoke and litter as well,” she said.

While there were no fatalities, some 630 firecracker-related injuries were recorded from December 21, 2016 to  January 5, 2017 with banned piccolo as the ruthless culprit.

To hammer home the message that firecrackers are not toys, three students dressed themselves up as firecracker blast victims with tattered clothes, bloodied faces, and severed fingers.

The EcoWaste Coalition also pointed to a cleaner environment as another benefit of not igniting firecrackers,  noting that young children, the elderly and persons with chemical sensitivities suffer the most from firecracker emissions.

The lighting of firecrackers, as well as fireworks, cause the release of air pollutants, including carbon dioxide, carbon monoxide, sulfur dioxide, particulate matters and other contaminants, which may aggravate asthma and respiratory tract infections and even trigger cardiac arrests.

Aside from the high levels of air pollutants, the detonation of firecrackers generates residual wastes such as charred containers and wrappers that are equally hazardous and cannot be recycled.

In lieu of firecrackers and other pyrotechnic devices, the EcoWaste Coalition recommends alternative means of merrymaking such as the use of kitchen and laundry utensils such as pots, basins, and pails, as well as torotot and improvised maracas, shakers and tambourines from recycled materials.