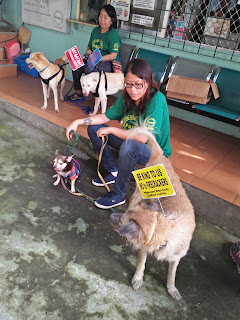 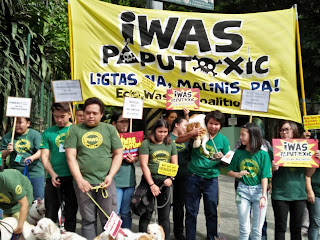 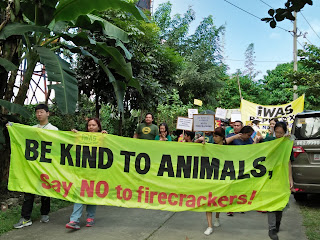 The Philippine Animal Welfare Society (PAWS) and the EcoWaste Coalition have again joined forces to give voice to cats and dogs who lack the power to speak and defend themselves against firecrackers and fireworks.

At an event held at the PAWS Animal Rehabilitation Center in Quezon City, the groups drew public attention to the negative effects of firecrackers and fireworks to our canine and feline friends.

The event also served to highlight the plight of hundreds of Asong Pinoys (aspins) and Pusang Pinoys (puspins) in the streets who are deeply traumatized when firecrackers are thrown at them.

“Animal cruelty is a crime. We warn those who may be thinking of committing dangerous pranks on stray animals that they could end up imprisoned or heavily fined if they hurt animals,” said Anna Cabrera, Executive Director of PAWS.

“We wanted a total ban on firecrackers not only because ear-splitting sounds from firecrackers can cause a lot of stress for dogs and cats but because of the air pollution they cause,” she said.

“The loud noise and the smell of exploding firecrackers may result in disorientation, loss of appetite, and an upset stomach for our furry friends,” she added.

“As they cannot speak for themselves, we need to speak out in defense of cats and dogs who suffer a lot from the deafening mayhem, especially on New Year’s eve.  The need to protect them from acoustic torture provides another reason why we should abandon the use of firecrackers,” stated Aileen Lucero, National Coordinator, EcoWaste Coalition.

During the event, Sharon Therese Bengzon-Yap, Education Officer of PAWS, provided some practical tips to help cats and dogs cope with the firecracker explosions during the New Year’s revelry.

1. Keep pets indoors, but do not chain or tie them. Please remember that it is not advisable to keep an unsupervised dog tied to a leash for long periods of time. Tethering for dogs should only be for a limited period -never 24/7 and certainly never during times when the animal could be stressed out due to loud sounds.

2. Exercise pets in the morning so they will be tired by night time and hopefully, resting or fast asleep by the time the New Year’s revelry begins.

3.  Provide a safe refuge for pets like a well-ventilated room with closed windows, and ensure their access to drinking water.

4.  Play a soothing music or put the TV on to neutralize the noise from the outside.

5.  Put a calming wrap or anxiety vest on pets to make them feel protected and secure.

6.  If possible, give stray or wandering animals temporary shelter in your yard. Do not shoo them away, give them food and water, and let them stay at least for the night.

PAWS and the EcoWaste Coalition further advised households to keep plastic bags, cleaning agents, tobacco products, alcoholic drinks and holiday treats such as chocolate, fruit cake and nuts out of the reach of pets to prevent pet poisoning incidents.