Groups Appeal to Black Nazarene Devotees Not to Smoke, Throw Cigarette Butts on the Ground 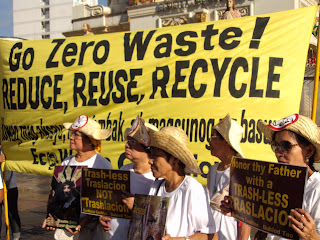 Environmental and health groups have requested the millions of devotees joining the celebration of the feast of the Black Nazarene on Monday to refrain from smoking to reduce the volume of toxic cigarette butts along the processional trail.

In a joint statement, the EcoWaste Coalition and the Framework Convention on Tobacco Control Alliance, Philippines (FCAP) both emphasized the benefits to public health and the environment of not smoking and of not throwing cigarette butts on the streets.

“By not smoking, devotees will not only do themselves a favor, but also protect their fellow devotees from being exposed to the harmful effects of second-hand smoke,” said lung specialist Dr. Maricar Limpin, Executive Director, FCAP.

“Smoking kills.  In fact, it is now the country’s top killer causing as much as 50,000 deaths every year from tobacco-related diseases such as emphysema and cancer,” she warned.

Limpin pointed out that seven of the leading causes of death in the country are linked to smoking, including diseases of the heart, diseases of the vascular system, cancer, pneumonia, tuberculosis, chronic obstructive lung disease and other diseases of the respiratory system.

For her part, Ochie Tolentino, Zero Waste Campaigner, EcoWaste Coalition, said:  “Many devotees smoke and simply throw the butts on the ground unmindful of their adverse impacts on human health and the environment.”

“Cigarette butt waste is not only an ugly litter issue, but a toxic threat as well as the butt contains many chemicals of concern that can leach and contaminate the surroundings and living organisms,” she said.

Studies have indicated that thousands of chemicals are found in cigarettes, and that many of these chemicals may be introduced into the environment from the tobacco remnants of a cigarette butt or from the filters, including substances that are toxic to aquatic life.

Cigarette butts, being made of cellulose acetate plastic fibers, persist in the environment for a long time as these are very slow to degrade, posing hazard to animals, including birds, fish and turtles who can die from choking or blocked digestion due to eating non-biodegradable butt waste, the EcoWaste Coalition said.

In the Philippines, 65,933 of the 404,144 pieces of trash collected during that year’s coastal activities were cigarette butts.