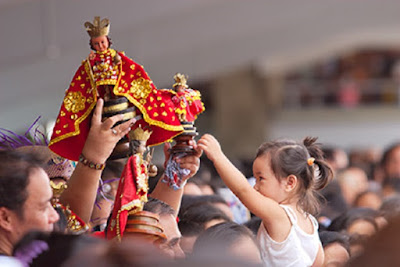 The environmental watch group EcoWaste Coalition asked Santo Niño devotees to be mindful of their trash as the popular feast of the revered Child Jesus nears.

Simultaneous religious festivities will be held nationwide this weekend in honor of the Child Jesus such as the Buling-Buling and Lakbayaw in Pandacan and Tondo, Manila, Ati-Atihan in Aklan and Sinulog in Cebu, while the festive Dinagyang in Iloilo will take place on January 20-22.

The EcoWaste Coalition appealed for reduced fiesta garbage soon after the mammoth feast of the Black Nazarene last Monday in Manila that saw a twofold increase in the trash collection for Traslacion this year.

As reported by Task Force Manila Cleanup, the city’s waste personnel collected 12 truckloads of garbage or 69.43 tons from January 9 until 9:30 am of January 10, which was twice the volume of trash collected during the same period in 2016.

“While our appeal for a trash-less Traslacion was sadly unheeded as shown by widespread littering that again tarnished our people’s epic devotion to the Black Nazarene, we still would like to reiterate our call for a cleaner celebration of the feast of Santo Niño this Sunday,” stated Ochie Tolentino, Zero Waste Campaigner, EcoWaste Coalition.

“We specifically request concerned barangay councils, neighborhood associations and parish communities with Santo Niño as patron to seek ways of enjoining the cooperation of their constituents for a trash-less fiesta,” she said.

“Santo Niño devotees, particularly the adults, will rise to the occasion and treat the environment with respect – an indispensable value that the young can learn from the old in this era of climate change,” she emphasized.

“Regardless of where your pilgrimage will be, be it in Manila, Cebu, Kalibo, Iloilo or anywhere else, please make it a point not leave any trash behind,” she said.

“Observing simple steps in ecological solid waste management such as by not littering, dumping and burning waste materials will contribute to a better environmental and health conditions for our kids,” she added.

The EcoWaste Coalition emphasized that Manileños should not be dependent on street sweepers who will do their job uncomplainingly.

“Keeping our communities spick and span is a shared assignment and not the sole responsibility of street sweepers even though they are paid to do it,” Tolentino pointed out.

“Please do not litter just because someone else will pick up after you,” she pleaded.