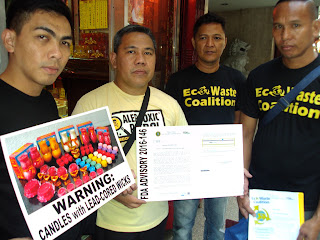 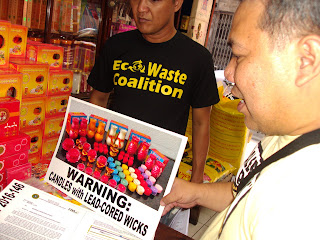 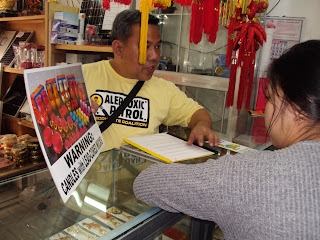 As part of its ongoing work to prevent children’s exposure to lead, a potent neurotoxin, the EcoWaste Coalition went to 11 stores in the heart of Chinatown to push retailers to stop the importation, distribution and sale of candles with leaded wicks.

The group had earlier notified the country’s health authorities through the Food and Drug Administration (FDA) about the trade of such candles in the local market that would be illegal to sell in other countries such as in Australia, Finland, Denmark and USA, which banned candles with lead-cored wicks in 1999, 2001, 2002 and 2003, respectively.  Australia in 2002 imposed a permanent ban on candles with wicks that contain 0.06% lead.

“With the health and safety of the consumers in mind, particularly children who are most vulnerable to lead exposure, we request the FDA to release a public health warning against lead-cored wick candles and to stop importers, distributors and retailers from selling such toxic candles,” the group wrote to the FDA in September 2016.

“While the advisory did not ban the sale of lead-cored wick candles as we have sought, it clearly warned that the purchase and use of such candles pose an ‘imminent hazard to the public health,’ providing a cue that such products must not be produced and sold at all,” said Thony Dizon, Coordinator, EcoWaste Coalition’s Project Protect.

“We’re keeping our fingers crossed that a follow-up directive would outlaw the sale of all candles with wicks and other components containing lead for full compliance by candle makers and traders,” he added.

Armed with copies of the said advisory, the EcoWaste Coalition visited stores selling Chinese praying paraphernalia such as candles and informed store owners about the adverse health effects of candles with lead-cored wicks.

“As a lead-cored wick candle burns, some of the lead may vaporize and be released into the air.  This airborne lead may be inhaled and may deposit onto floors, furniture and other surfaces in the room where children may be exposed to it,” the FDA 2016-146 warned.

According to the FDA, exposure to lead emissions “can result in increased blood lead levels in unborn babies, babies and young children,” adding that “other toxic effects includes neurological damage, delayed mental and physical development, and attention and learning deficiencies.”

The EcoWaste Coalition in 2014 bought imported candles with lead-cored wicks from Wonderful Trading, a shop selling Chinese prayer articles, and then sent them to a private laboratory for lead content analysis.  As per the laboratory test report, the wicks of approximately 20 candles were found to contain 20.735% lead, which is way above the 0.06% limit in Australia.

“Fortunately, most locally-made candles are non-cored wicks made of braided or twisted cotton and present no risk of lead pollution,” Dizon said.

“As a precaution against lead exposure, we advise consumers to patronize ‘made in the Philippines’ candles with non-cored wicks and avoid those with cored wicks as the metal inside may be lead-based,” he added.

According to the EcoWaste Coalition, “while the ingestion or inhalation of lead-containing paint chips and dust is the most typical source of childhood lead exposure, lead, as a cumulative toxicant, can build up in the body over time and even exposure to low levels of lead can increase the blood lead levels in kids.”

“There is no known level of lead exposure that is considered safe,” according to the World Health Organization, which lists lead as one of the “ten chemicals of major public health concern.”