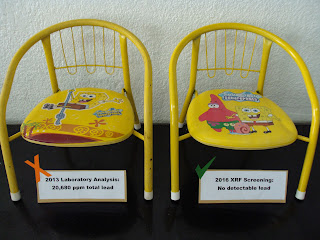 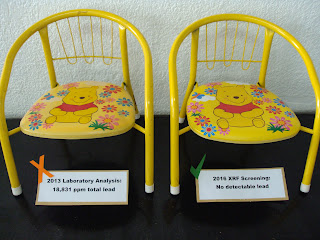 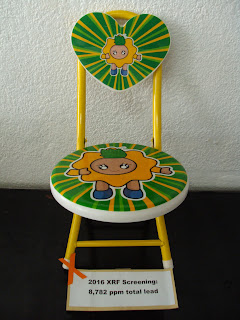 Children's chairs with dangerous levels of lead as per laboratory tests conducted in 2013 are now found to be lead-free.


The EcoWaste Coalition, a non-profit watch group tracking toxic chemicals in products and wastes, made this pleasant discovery after screening new metal framed kiddie chairs with SpongeBob SquarePants and Winnie the Pooh designs.

As part of the group’s observance of the International Lead Poisoning Prevention Week of Action,  the group bought chairs costing P125 to P180 each from general merchandise stores located in Monumento, Caloocan City, Quiapo, Manila City and Libertad, Pasay City.

“We are delighted to find out that these erstwhile lead-tainted kiddie chairs are now decorated with lead-safe paint.  It’s a clear proof that manufacturers of toys and childcare articles are in a position to switch to paint with no added lead that is safe for kids,” said Thony Dizon, Coordinator, EcoWaste Coalition’s Project Protect.

“But these children’s chairs still lack labeling information and the required certificate of product notification for toys and childcare articles from the health authorities,” he clarified.

Laboratory tests commissioned by the EcoWaste Coalition in 2013 showed that seven of the nine samples of kiddie chairs had lead above 90 parts per million (ppm), the regulatory limit for lead in paint under the Department of Environment and Natural Resources (DENR) Administrative Order 2013-24.

The top two samples with dangerous concentrations of lead were the chair with SpongeBob SquarePants design with 20,680 ppm, followed by the one with a Winnie the Pooh design with 18,831 ppm.

Based on XRF screening conducted yesterday, identical samples of the said kiddie chairs had no detectable lead.

However, a third sample - a folding kiddie chair with a flower-like character design – was found to contain 8,782 ppm of lead.

“As this lead painted chair is used, damaged or chip with time, the lead can be released in dust that children can swallow or breathe in.  Kids tend to put their hands as well as objects in their mouths, which raises their chances of ingesting lead-containing dust and even paint chips that may  have higher lead content,” stated Thony Dizon, Coordinator of the EcoWaste Coalition’s Project Protect.


“As lead is most harmful to young children even at low levels of exposures, we urge manufacturers, importers, distributors, wholesalers and retailers of toys and other childcare articles to use lead-safe paint at all times,” he said.

Lead-containing paints for architectural, decorative and household uses are to be phase-out from the market by December 31, 2016 as per DENR A.O. 2013-24.


“While the ban will only take effect after December 31, we ask all business establishments, especially those that cater to budget-conscious consumers, not to offer their customers with lead-contaminated toys and related products,” appealed Dizon.


“We need not wait for the regulation to take effect before we do something that will protect our children from the health-damaging effects of lead exposure.  Nothing will justify poisoning innocent children with lead,” Dizon said.

Lead, a hazardous substance, can harm the brain and the central nervous, as well as the blood systems, the kidneys and the bones.  Lead exposure is associated with reduced intelligence, poorer school performance, inattentiveness, hyperactivity, impulsive and violent behavior, juvenile delinquency and incarceration

“Toys and related products,” as clarified in the Environmental Management Bureau’s Memorandum Circular 2016-10 issued on August 28, 2016, include home furnishings and fixtures such as cribs, chairs, tables, shelves, walkers, strollers, beds, decorative materials and embellishments for children’s use.