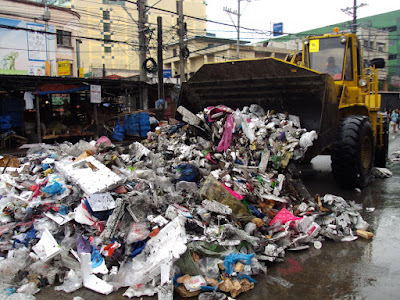 An environmental and health watch group has thrown its support behind an intensified drive by the Metro Manila Development Authority (MMDA) against litterbugs.

“Littering, the most obvious and widespread environmental offense committed by people of all ages and walks of life, has to stop,” stated Aileen Lucero, National Coordinator of the EcoWaste Coalition.
“We all need to support the MMDA’s renewed drive against litterbugs as this is for the common good. It’s time to pursue a war on waste to protect human health and the environment,” she added.

Last week, the EcoWaste Coalition, along with the other members of the Green Thumb Coalition’s Waste Cluster, urged President Rodrigo Duterte and Secretary Regina Lopez to wage a war on waste and pollution.

“As one agency’s effort will never be enough to put a stop to this pervasive culture of littering, we appeal to all local government units (LGUs) to bolster their existing initiatives to complement MMDA’s anti-littering program,” she said.

“A vigorous enforcement by the LGUs of Republic Act 9003 and related ordinances that seem to be gathering dust will help promote environmental awareness and responsibility among citizens and halt all forms of indiscriminate garbage disposal,” she added.

R.A. 9003, or the Ecological Solid Waste Management Act, promotes waste avoidance and volume reduction, separation of discards at source, reuse, recycling, composting and other best practices in waste management without dumping and burning.

“The LGUs should employ and deploy more environmental educators and enforcers on the streets to hammer home the message that littering, like open burning and open dumping, is an arrogant, inconsiderate, lazy and polluting act punishable by law,” Lucero said.

Data from the MMDA website indicate that cleanup operations targeting creeks and esteros collected over 1,400 truckloads of silt and trash from July to September this year.

Since it enforced its anti-littering regulations in 2010, the MMDA has reportedly accosted and fined 252,244 litterbugs and violators who were penalized with a fine of P500 to P1,000 or required to render community service.