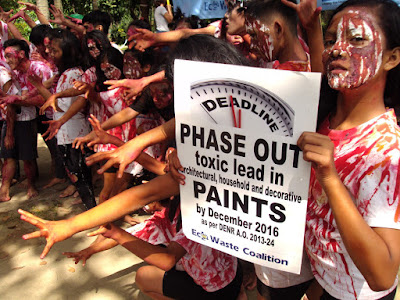 (Gotenburg, Sweden) Many decorative paints sold in over 40  low- and middle income countries contained dangerous levels of lead, sometimes in direct violation of national regulation, according to a new report released by IPEN today. The report, Global Lead Paint Report, brings together data from paint studies conducted since 2009 in 46  low- and middle-income countries in Africa, Asia, Latin America and Eastern Europe. The majority of these countries lack regulation limiting the lead content of paint.

“While major producers have begun removing lead from their products in a number of developing countries in Asia, there is an alarming amount of lead paint still sold in all developing regions of the world. It is really quite shocking that a parent who paints their child’s nursery a sunny yellow or someone who runs a colorfully painted child care center may be, through no fault of their own, exposing a child to permanent brain damage caused by lead exposure,” said Dr. Sara Brosche, Project Manager, IPEN Lead Paint Elimination Campaign.

IPEN released its Global Lead Paint Report as a part of worldwide activities during the International Lead Poisoning Prevention Week of Action (ILPPWA), October 23 -29, 2016, co-led by United Nations Environment Program (UNEP) and the World Health Organization (WHO). In addition to the report, IPEN participating organizations also released new reports on lead in paint in nine countries and conducted lead awareness activities in more than 25 countries.

In a statement prepared for this year’s ILPPWA, Dr. Maria Neira Director of the Department of Public Health, Environmental and Social Determinants of Health for the World Health Organization (WHO) said: “Exposure to lead poses a significant hazard to human health, especially for children. . .There is no need to add lead to paint - safer alternative chemicals can be used. The best way to ensure the availability of lead-safe paint is for countries to put in place laws, regulations or mandatory standards that prohibit the manufacture, import, export, sale or use of lead paint.”

The report documents that progress has been made since 2009 in eliminating lead paint:
· Data on lead in paint is now available in 46 countries, with 15 additional studies scheduled for release by IPEN and NGO partners in 2016.
· Binding regulatory controls limiting the lead content of paint have been enacted or are pending in 6 Asian countries and 4 African countries. The East African Community (EAC) has adopted mandatory standards restricting the use of lead in paint in its five member states.
· The International Lead Poisoning Prevention Week of Action generated activities in nearly 90 cities in 30 countries in 2015.
· Akzo Nobel, the world’s second largest paint producer has announced that it had removed lead from all its paint product lines. The world’s largest paint producer, PPG, announced it had removed leaded ingredients from all its consumer paint brands and products in all countries and will completely phase out the use of lead in its products by 2020. In addition, major Asian paint producers in a number of countries have begun eliminating lead from their paint products.
· Three major manufacturers (Boysen, Davies in the Philippines and Multilac in Sri Lanka) have been certified under the world’s first certification program, Lead Safe Paint®.

The report makes several recommendations to achieve the Global Alliance to Eliminate Lead Paint’s (GAELP) target date of 2020 for all countries having adopted legally binding laws, regulations, standards and/or procedures to control the production, import, sale and use of lead paints. GAELP is co-hosted by WHO and UNEP.

More governments should begin developing lead paint regulations. Government agencies can begin now to establish multi-stakeholder consultations to address how lead paint controls will be formulated and the timeline for their entry into force. Regulations should include a 90 ppm total lead limit for all paints as well as budgets and protocols for monitoring and enforcement.

Paint manufacturers, paint industry trade associations and paint ingredient vendors should take voluntary action immediately to eliminate lead from all paints, with decorative and other paints used in and around homes and schools as a priority. Ethical manufacturers need not wait for government controls before they act. National, regional and international paint industry trade associations should send clear and strong signals to their members that now is the time to end all manufacture and sale of lead paints.

Lead in household paints has been regulated in most highly industrial countries for more than 40 years. The United States and Canada recently established a regulatory limit of 90 parts per million (ppm) lead in response to growing concerns that even low-level lead exposures are harmful to children. Some other countries have established regulatory limits of lead in paint at 600 ppm lead.

Lead in paint is a problem because painted surfaces deteriorate with time and when disturbed. If there is lead in the paint, the lead then contaminates household dust and soils surrounding the home. Children ingest lead from dusts and soils during normal hand to mouth behavior. Damage to children’s intelligence and mental development occurs, even when there are no obvious or clinical signs of lead poisoning. Recent WHO guidelines indicate that there is no known acceptable lead exposure level for children.[1]

When children are exposed to lead, this tends to decrease their performance in school and their lifelong productivity as part of the national labor force. A recent study investigated the economic impact of childhood lead exposure on national economies and estimated a total cumulative loss of $977 billion international dollars per year for all low and middle income countries.[2] The estimated economic loss in Africa is $134.7 or 4.03% of Gross Domestic Product (GDP).

IPEN. IPEN is a leading global organization of 700 non-governmental organizations from 116 countries working to protect human health and the environment from harms caused by toxic chemical exposure.