In Memory of Miriam: Send Illegal Garbage Shipments Back to Canada - EcoWaste Coalition 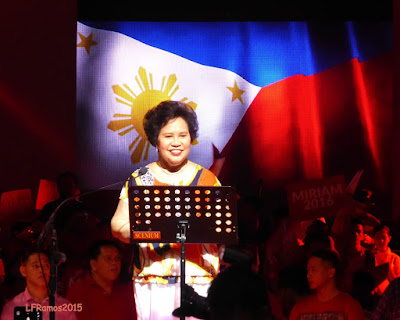 The hastened implementation of a court order to return illegal Canadian garbage shipments to its origin will honor the legacy of the late Sen. Miriam Defensor Santiago who firmly stood against the disposal of the imported trash in local facilities.

“We appeal to the importers and agencies in charge to fast track the removal of the Canadian trash from our territory in honor of Miriam’s memory.   Let us pay tribute to her by taking action to protect our country against waste dumping that she has vehemently denounced as an affront to our national dignity and sovereignty.   We must not allow our country to be treated as ‘an international trash bin’ as Miriam rightly told us as this could also pose a serious threat to public health and the environment,” said Aileen Lucero, National Coordinator of the EcoWaste Coalition.

Lucero is one of the complainants-in-intervention to Criminal Case No. 14-311191 against importers Adelfa Eduardo and Sherjun Saldon for violation of the said law, along with co-intervenors Ang Nars Party-List, EcoWaste Coalition, Global Alliance for Incinerator Alternatives, Public Services Independent Labor Confederation, Sentro ng mga Nagkakasia at Progresibong Manggagawa and private individuals Raphael Lopez and Arjohn Queral.

“As we all know, the late Senator strongly backed the re-export of the Canadian garbage to its origin,” Lucero said, citing the two Senate resolutions that Miriam sponsored in response to the still unresolved dumping controversy.

In May 2015, Miriam filed Resolution 1341 “expressing the sense of the Senate that the Philippine government should consider the Basel Convention in negotiating with the government of Canada over the issue of waste illegally dumped on Philippine soil.”

This was followed by Resolution No. 919 filed in September 2015 urging the Senate “to direct the proper Committee to conduct an inquiry, in aid of legislation, on ways to decisively prevent illegal waste dumping from abroad, including the ratification of the Basel Convention Ban Amendment and other legal measures to protect the country from becoming a global dump for hazardous wastes.”


Responding to an election survey questionnaire sent by the EcoWaste Coalition last March to all the 2016 presidential candidates, Miriam declared that:  “We must not process the waste in the Philippines, as it sets a dangerous precedent. If we allow one country to turn the Philippines into a garbage dump, we are telling all other countries that they can do the same.”

A total of 103 shipping containers of mixed household garbage from Canada disguised as scrap plastics for recycling arrived in Manila ports some time in 2013-2014 and providently intercepted by the customs authorities.

Twenty six of these garbage-filled containers were illegally disposed of in 2015 at the privately-run Metro Clark landfill  in Capas, Tarlac angering local government officials and residents.