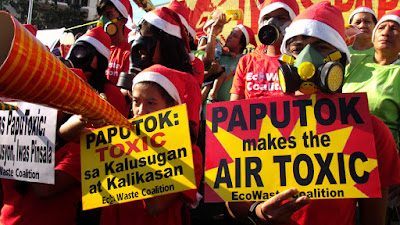 A waste and pollution watch group has reiterated its call for a ban on firecrackers and other pyrotechnic devices following a deadly blast at a firecracker store in Bocaue, Bulacan yesterday morning.

The EcoWaste Coalition, which has been conducting its “Iwas Paputoxic” drive since 2003 complementing the government’s annual campaign against firecrackers, warned that more people would perish and suffer this year if the “outdated” habit of igniting firecrackers and fireworks continue unabated.

“We appeal to the government to turn the citywide Davao ban on firecrackers and fireworks into a nationwide regulation that will safeguard human health and the environment from hazardous emissions and wastes, and protect the animals, too” said Aileen Lucero, National Coordinator, EcoWaste Coalition.

“It’s high time that the rule of law, particularly the enforcement of our environmental and animal welfare laws, prevails in our customary welcome of the New Year,” she added.

The group expressed its hope that the Executive Order (EO) being drafted by the Department of Health as announced by Secretary Paulyn Ubial would totally ban the manufacture, distribution and sale of firecrackers for individual and household use, and illegalize their sale to the general public.

“As most of the victims of firecracker-related injuries are young children, we also hope that the EO would impose tough penalties to vendors selling firecrackers to minors,” she said.

The much-anticipated EO, the EcoWaste Coalition said, could contribute a great deal to turning our New Year festivities into a zero injury, zero emission and zero waste celebration or darn close.

The large-scale explosion of legal and illegal pyrotechnics to usher in New Year is not in agreement with the state policy of protecting human health and the environment as mirrored in several national laws, the group pointed out.

Among the laws that are blatantly disregarded during the celebrations include the Clean Air Act, the Clean Water Act and the Ecological Solid Waste Management Act, as well as the Animal Welfare Act, the group said.