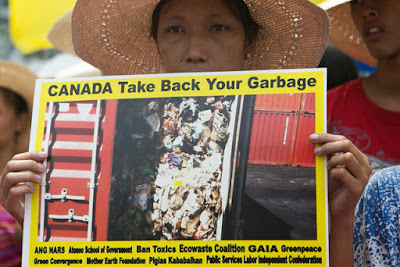 The conspicuous exclusion of the Canadian garbage dumping issue in yesterday’s bilateral talk between President Benigno S. Aquino III and Prime Minister Justin Trudeau on the sidelines of the Asia Pacific Economic Cooperation (APEC) Summit drew a chorus of disapproval and protest from environmental and labor leaders.

“What a total letdown!  Aquino and Trudeau both missed the chance to exercise real leadership and do the right thing.  They could have demonstrated to the world what bilateral trade should not look like.  Ignoring and sweeping the Canadian garbage scandal under the carpet will not earn you the respect of your people and other nations,” said environmentalist Von Hernandez, 2003 Goldman Environmental Prize winner, 2007 Time Hero of the Environment, previous Executive Director of Greenpeace Southeast Asia and former President of the EcoWaste Coalition.

“It’s a shame that Mr. Trudeau and new members of his government chose not to take responsibility over the Canadian garbage that has been soiling good relations between Canadians and Filipinos for some time now.  By not acting toward his government taking back the stinking trash from the Philippine soil for good, the Filipino people will now begin to doubt Mr. Trudeau’s sincerity and capacity to lead the Canadian people to his campaign promise of an environment-caring shared prosperity,” said Alan Tanjusay, Spokesperson of the Trade Union Congress of the Philippines (TUCP).

“This is unconscionable!  It sends the message to our trading partners that our people’s welfare is for sale,” said Josua Mata, Secretary-General, Sentro ng mgaNagkakaisa at ProgresibongManggagawa (SENTRO).

Rene Pineda, Vice-President of the EcoWaste Coalition, said: “Much to our regret, we are forced to seek redress and judicially compel the Philippine government to do its mandated duty under our national laws and the Basel Convention and require Canada to take back its waste.”

Had Trudeau made the right move to resolve the issue, the EcoWaste Coalition, a watchdog group for chemical safety and zero waste, would have reacted differently and would have released the following statement:

“He did not fail us!  Hats off to PM Trudeau for heeding our plea for environmental justice that his unbending predecessor Stephen Harper chose to ignore.  We’re sure that Filipinos will remember him not only for his towering height and good looks, but for this splendid ‘gift of justice’ to fix a long drawn-out dumping scandal that has pricked the national consciousness, dignity and pride.”

The group would have also said: “We hope that this controversy will conclude with both Canada and the Philippines taking firm action to prevent the recurrence of such illegal waste trade, including the ratification of the Basel Ban Amendment that prohibits hazardous waste exports from developed to developing countries for recycling and final disposal.”

From June 2013 to January 2014, a total of 103 container vans of mixed garbage from Canada, misdeclared as “plastic scraps” for recycling, entered the country in 10 batches and subsequently intercepted by customs authorities.

After sitting in the ports, 26 containers of these trash consignments were illegally disposed of at the Metro Clark Landfill in Tarlac between June 26 to July 8, 2015, drawing the ire of local officials and residents.

The Tarlac provincial board then stopped the illegal dumping, prompting other local government units such as the province of Bulacan and  Navotas and Quezon Cities, to follow suit and prohibit foreign waste disposal in local landfills to protect the public health and the environment.