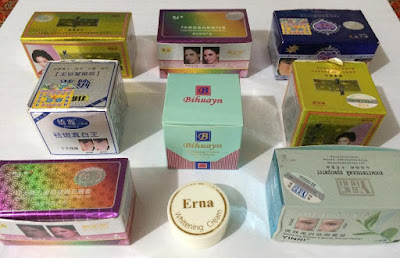 The Davao City-based Interface Development Interventions (IDIS) and the Quezon City-based EcoWaste Coalition issued the joint warning against dangerous cosmetics with undisclosed amounts of mercury after finding them in store shelves in Davao City.

The illegal products are still available on the market despite the ocular inspections conducted by the City Health Office and the Food and Drugs Administration (FDA) Region XI in some retail outlets last April, the groups observed.

"The continued sale of banned mercury-laden skin whitening products is a serious threat to public health and should stop at once.  Cosmetics retailers should only offer registered products that are safe from mercury and other substances that are damaging to human health," said Ann Fuertes, Executive Director of IDIS.

The World Health Organization (WHO) describes mercury as "toxic to human health" and lists it among the "ten chemicals of major public health concern."

"Exposure to mercury even at very low doses is detrimental to health and should be avoided," emphasized Fuertes.

"We hope that the Davao City authorities will take immediate action to cut the supply of these dangerous cosmetics and severely penalize those involved in the illegal trade of mercury-added skin lightening creams," said Thony Dizon, Coordinator of the EcoWaste Coalition's Project Protect.

IDIS and EcoWaste Coalition urged the authorities to conduct frequent surprise inspections on a regular basis to rid the market of these contraband goods, as well as pass an ordinance to systematically address issues and concerns on toxic chemicals.

In test buys conducted last November 11, Dizon, who was then visiting Davao City, managed to buy nine skin whitening products that were among those banned by the FDA for violating the 1 part per million (ppm) threshold limit for mercury under the ASEAN Cosmetics Directive.

The products were obtained from cosmetics and herbal product retailers at DCLA Shopping Center and from a kiosk at Plaza Luisita for P50 to P150 each.

Subsequent screening in Quezon City using an X-Ray Fluorescence device detected mercury up to 5,445 ppm in the samples, way above the allowable limit of 1 ppm.

Health studies have indicated that exposure to mercury – even in  low  amounts  –  may  have  toxic  effects  on  the  nervous,  digestive,  immune,  respiratory  and  urinary systems, may  damage the skin  and may  present "a threat  to  the  development of  the  child  in utero and early in life."

Direct users of mercury-laced skin whitening cosmetics may experience skin discoloration, rashes and scarring and reduced skin's resistance to bacterial and fungal infections, while repeated applications can cause damage to the brain, the nervous system and the kidneys.

Mercury compounds in skin whitening cosmetics can enter the human body mainly via skin absorption as well as inhalation.

In February this year, the EcoWaste Coalition published the "Beauty and the Risk" report documenting the widespread sale of contraband mercury-containing skin whitening cosmetics in 50 cities, including in Davao City and 11 other cities in Mindanao.

To curb the illegal trade in mercury-containing skin lightening cosmetics, the report stressed that Filipinos should "take pride in our natural skin complexion."

"There is beauty and dignity in our 'kayumangging kaligatan,' so refrain from using skin bleaching, lightening or whitening products, particularly contraband cosmetics that have not gone through formal notification or registration with the FDA and not guaranteed safe from mercury, hydroquinone and other harmful substances," the report said.