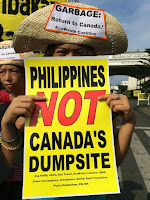 A senior statesman acknowledged as the “Father of the Local Government Code” has added his voice to the never-ending chorus of protest over the dumping of illegal garbage imports from Canada.

Aquilino “Nene” Pimentel, Jr., former Senate president and principal author of Republic Act 7160, or the Local Government Code of 1991, insisted that our country is not a dumpsite for other nations’ rubbish and that local government units (LGUs) are right in exercising their powers to prevent such wrongful act.

“The Philippines is not a garbage dump of Canada or any country for that matter,” the seasoned politician stated through a text message sent to the EcoWaste Coalition, an environmental watchdog group.

“Tarlac government units are right and they should be commended for asserting their constituents’ human right to clean air and environment,” he said.

Pimentel was referring to the successful action by the Tarlac local authorities to investigate and stop the further dumping of reeking Canadian trash in a privately-owned landfill facility in the town of Capas.

At the investigation presided over by Vice Governor Enrique Cojuangco, Jr. last July 16, the EcoWaste Coalition told the provincial board that “dumping from overseas undermines our ongoing efforts to reduce the volume and toxicity of our own garbage, projected to reach 39,422 tons per day this year.”

“With the enormous financial and technical resources at its command, Canada should have no problem managing its used diapers, electronic junks, plastic scraps and other wastes in its own soil instead of shipping them to our shores for disposal,” Aileen Lucero, Coordinator of the EcoWaste Coalition said in her intervention.

Following the investigation, the Tarlac Provincial Board on July 24 passed Resolution 056-2015 “demanding for the immediate rescission/cancellation of the contract between the Bureau of Customs and Metro Clark Waste Management Corp. relative to the dumping of the garbage from Canada in Kalangitan  Landfill in Capas, Tarlac.”

“We want to categorically state that the provincial government is against the dumping of any foreign waste in any part of Tarlac,” stated presiding officer Cojuangco after the board unanimously adopted the resolution.

After Tarlac said no to imported garbage, the EcoWaste Coalition quickly asked LGUs hosting landfills, as well as cement plants using garbage as fuel, to be on their toes as customs officials scurry for alternative disposal sites for the Canadian trash.

Like Tarlac, the group insisted that other LGUs should block foreign waste disposal in their jurisdiction in accordance with Section 16 of the Local Government Code, which empowers LGUs to act to promote the general welfare, including the right of the people to health and safety and to a balanced ecology.