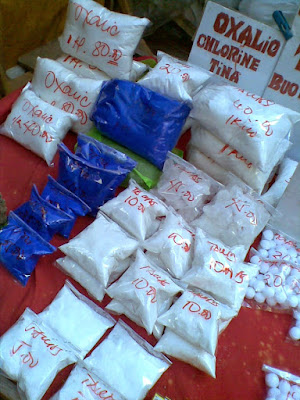 The government must act fast to prevent more cases of oxalic acid poisoning that had so far claimed the lives of four people this year.

The EcoWaste Coalition pleaded for the strict regulation of oxalic acid that will specifically ban its unregulated repacking for retail on streets and public markets, as well as its unchecked use for non-industrial applications.

The Philippine National Police Crime Laboratory on Tuesday confirmed oxalic acid poisoning as the cause of death of Jose Maria and Juliet Escano who died last July 9 based on the analysis of the contents of the victims’ stomachs.

“These fatal poisoning cases due to the ingestion of oxalic acid should serve as a wake-up call to government regulators at both national and local levels to act with lightning speed before this poison claims another life,” said Thony Dizon, Coordinator of the EcoWaste Coalition’s Project Protect.

To address this issue at the national level, the EcoWaste Coalition urged the government to convene the Inter-Agency Committee on Environment Health, particularly its sector on toxic and hazardous substances, which is tasked to “formulate policies, promulgate guidelines and develop programs for environmental health protection.”

Urgently convening IACEH after these tragic oxalic acid poisoning cases will support the country’s “National Chemical Safety and Toxicology Policy” as provided for under Department of Health Administrative Order 2013-009, the group pointed out.

At the local level, the group urged municipal and city councils to enact ordinances that will prohibit and penalize the unauthorized distribution and sale of repacked oxalic acid in line with the general welfare clause of the Local Government Code, which empowers local government units to adopt measures that will, among other things, “promote health and safety.”

As per its material safety data sheet (MSDS) , oxalic acid is very corrosive to the human body and may be fatal if inhaled, swallowed or absorbed through the skin.

According to the PNP, “about 10 µg/mL (micrograms per milliliter) of oxalic acid is considered (a) dangerous amount.”

“The average human body contains approximately four liters of blood. Therefore, it will only take about 40 mg of oxalic acid to poison a human body which can potentially lead to a person’s death,” the PNP said.