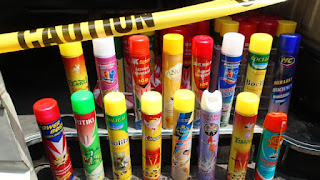 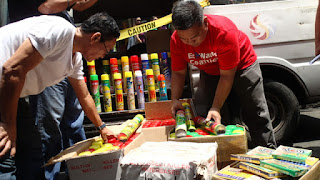 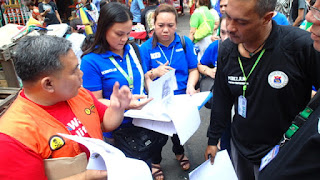 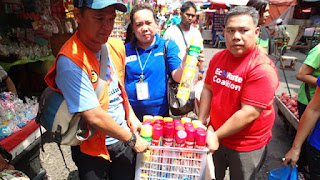 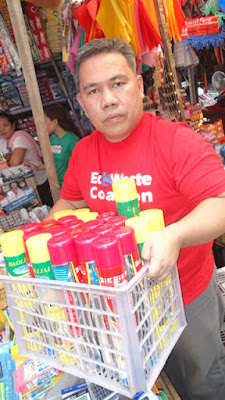 On Thursday, MHD teamed up with the EcoWaste Coalition in conducting the market inspection targeting household insecticides and mosquito coils that are being sold without the required Food and Drugs Administration (FDA) product registration.

The joint MHD-EcoWaste operation led to the seizure of six boxes of banned Baolillai, Big Bie Pai and Butiki insecticides in aerosol cans and one box of Butiki mosquito coils that were taken from retailers at M.D. Santos St. and from 698 Mall along Sta. Elena St..

Banned household insecticides were also seen at discount stores in 168 and Lucky Chinatown Malls prior to the inspection, but were hidden away by vendors before the law enforcers came.

The EcoWaste Coalition, a non-profit watchdog group promoting chemical safety and zero waste, had earlier alerted the MHD about the unlawful sale of such products at Annex B of Lucky Chinatown Mall and adjacent streets.

The FDA as early as August 2013 had warned the public against the use of  unregistered insect killers, smuggled and dumped in the country, which have not passed the agency’s efficacy and safety assessment.

“The illegal sale of unregistered insect killers has gone on unabated, particularly in Divisoria, Quiapo and other popular bargain hubs,” lamented Thony Dizon, Coordinator of the EcoWaste Coalition’s Project Protect.

“In fact those insecticides banned in 2013 are still openly sold in the domestic market despite being tagged by the FDA as ‘harmful, toxic  and imminently dangerous to human and animal health’ in blatant defiance of the law,” he added.

“Worst, the number of such contraband insect killers in the market has multiplied as we have reported to Health Secretary Janette Garin,” he emphasized.

Last August 5, the EcoWaste Coalition wrote to Garin to reiterate the need for action to put a stop to the illicit trade of unregistered household insecticides.

The group expressed optimism that law enforcement activities by the MHD and its counterparts in other local government units (LGUs) will make a dent on the illegal insecticide trade.

“MHD’s vigilance will surely bear positive results and we hope that other LGUs will follow suit and clamp down on traders of such health-damaging products,” the EcoWaste Coalition said.

Copies of FDA advisories banning household insecticides and mosquito coils without product registration were given to vendors for their information and compliance.

Escort Service In Delhi said…
Escort girls in Delhi make independent Brahma; Delhi call girls are always ready to serve you for interested people. Call girls in Delhi have been placed in many categories. Surely we are available according to you, you can come on our website and contact us. Female Escort In Delhi
Wednesday, March 24, 2021