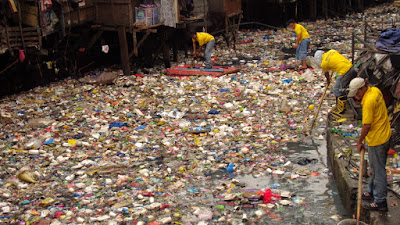 An environmental watchdog appealed anew to the general public to stop careless trash disposal that is surely aggravating the flashfloods amid the frequent occurrence of thunderstorms in Metro Manila.

The EcoWaste Coalition, a persistent campaigner for public health and safety, made another pitch for the ecological management of household and commercial discards in the wake of repeated flooding incidents in the metropolis due to intense thunderstorms.

“We call upon all households, as well as commercial establishments, to stop reckless garbage disposal that is clogging the waterways and filling the dumpsites to the brim,” said Aileen Lucero, Coordinator, EcoWaste Coalition.

“As we all know, what we carelessly throw will come back to us in forms that are perilous to both life and limb such as flashfloods, stagnant pools and water-borne diseases,” she said.

While the connection between improper waste management and flooding is a no-brainer, many individuals, homes and businesses irresponsibly dispose of their discards, lamented Lucero.

“Smokers toss cigarette butts on the ground, kids and adults drop candy and snack wrappers wherever they like, while others lob garbage-filled plastic bags on the streets, vacant lots, creeks and rivers,” she pointed out.

“Commercial establishments such as restaurants that do not have grease traps and simply throw used oil into the sink are also to blame for the floods as used oil tends to harden and obstruct the drainage system,” she emphasized.

“Other thoughtlessly thrown discards such as hair cuttings from barber shops and beauty parlors, polystyrene containers for food and beverage and construction and demolition debris can also seriously block the drainage,” she added.

To ease urban flooding, the EcoWaste Coalition reiterated the need for people and businesses to rally behind waste prevention and reduction efforts at all levels, and to combat all forms of littering and dumping.

R.A. 9003, the Ecological Solid Waste Management Act, bans littering and other acts that pose harm to health and sanitation such as the open burning and dumping of trash.

R.A. 9275, the Clean Water Act, prohibits the discharging of materials that could cause water pollution or impede the natural flow in the water body and sets a fine of not less than P10,000 to not more P200,000 for every day of violation.

Unknown said…
You have discussed an interesting topic that every body should know. Very well explained with examples. i have found a similar website<a href="https://coopersenviro.com.au/
waste oil collection, waste oil disposal visit the site to know more about coopersenviro
Monday, June 25, 2018