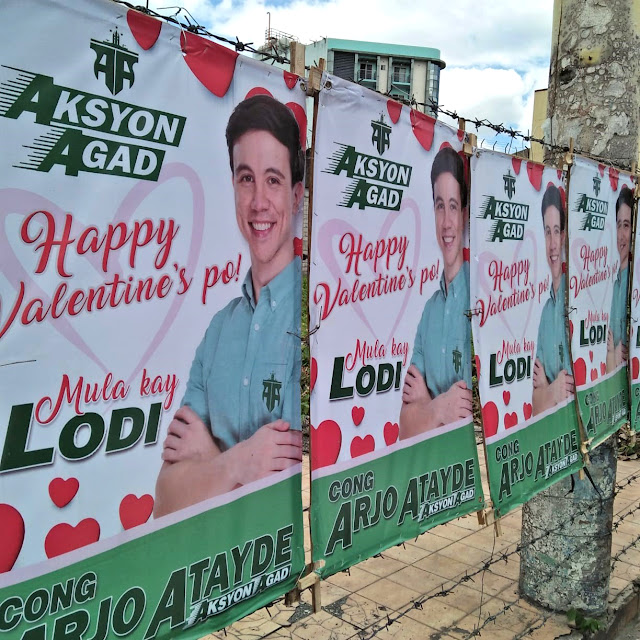 The EcoWaste Coalition has dissuaded candidates for the upcoming polls from hanging “Happy Valentine’s Day” plastic tarpaulins to cut down on waste and pollution.
In lieu of “Happy Valentine” tarpaulins, the advocacy group for a zero waste and toxics-free society persuaded political aspirants to commit to serving the people and the environment and to articulate the same in their public service platforms.
“Happy Valentine tarpaulins, especially during the campaign season, hardly mean anything to the electorate and can be completely avoided,” said Jove Benosa, Zero Waste Campaigner, EcoWaste Coalition.
“Politicians can better express their ‘love’ for their constituents by coming up with a responsive  public service platform that will truly advance the well-being of the people and, not to be forgotten, Mother Earth,” he added.
The EcoWaste Coalition pointed out that cutting back on tarpaulins will certainly trim down campaign expenses, noting that the bulk production price for such type of campaign paraphernalia is about five to 10 pesos per square foot.
More importantly, reduced production of campaign tarpaulins will translate to lesser volume of plastic waste laden with harmful chemicals, the group emphasized.
Tarpaulins, which are often made of polyvinyl chloride (PVC) plastic, contain toxic chemical additives such as cadmium-bearing stabilizers that are used to slow down degradation when PVC materials and other polymers are exposed to sunlight, the group said.
“These chemical additives will be released into the environment as the tarpaulins are removed and subsequently disposed of,” said Thony Dizon, Chemical Safety Campaigner, EcoWaste Coalition.
Dizon recalled screening hundreds of tarpaulins used for the 2013 and 2016 elections using an X-Ray Fluorescence (XRF) analyzer. Cadmium up to 1,279 parts per million (ppm) was detected in all 200 tarpaulins screened in 2013.  Cadmium up to 1,704 ppm was likewise found in all the 300 tarpaulins screened in 2016.
According to the United Nations Environment Programme (UNEP), “products containing cadmium are not typically collected separately from the general waste stream in developing countries. Therefore cadmium discards will end up in municipal waste and disposed of in landfills, incineration, open burning or indiscriminate dumping.”
“Some of the cadmium in these products will be released to the environment, the extent of which depends on disposal method, control technologies applied and other factors,” the UN agency said.
The EcoWaste Coalition further warned that burning chlorinated materials like PVC-based tarpaulins in the open or in incinerators will generate dangerous byproduct contaminants called dioxins, which are targeted for global reduction, if not elimination, under the Stockholm Convention on Persistent Organic Pollutants (POPs) of which the Philippines is a party.
According to the World Health Organization (WHO), “dioxins are highly toxic and can cause reproductive and developmental problems, damage the immune system, interfere with hormones and also cause cancer.”
References:
Email Post