QC Barangay Teams Up with DENR-EMB to Collect E-Waste 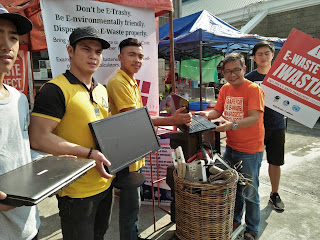 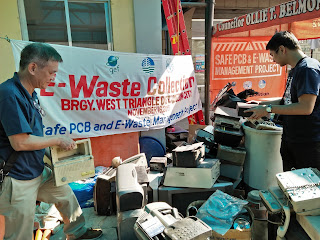 To promote the environmentally sound management of broken or discarded electrical and electronic equipment, Barangay West Triangle in Quezon City today held an e-waste collection event in collaboration with the national environmental authorities.

The e-waste collection event was carried out under the auspices of the “Safe PCB and E-Waste Management Project” led by the Department of Environment and Natural Resources – Environmental Management Bureau  (DENR-EMB) and funded by the Global Environment Facility (GEF) and the  United Nations Industrial Development Organization (UNIDO).

Among the items collected were unwanted TV sets with plastic casings and cathode ray tubes (CRTs), computers, laptops, appliances and assorted e-gadgets such as cellphones and tablets brought by community residents.

“We have embarked on this timely activity to assist our constituents in managing their e-wastes in a way that will not pollute our surroundings and endanger people’s health,” said Elmer Timothy Ligon, Chairperson, Barangay West Triangle.

“This effort, undertaken with assistance from the DENR-EMB and the EcoWaste Coalition, hopes to instill among our residents that we could not simply throw e-waste in regular trash bin because of the many hazardous chemicals they contain,” he said.

“In line with Republic Act 9003, or the Ecological Solid Waste Management Act, and the Quezon City Environment Code, e-waste is required to be separated from domestic waste or the refuse generated by a household,” explained Ka Timmy as he is fondly called.

After documenting the items received, the e-waste collected will be sent to the Integrated Recycling Industries. Inc., a government-accredited  facility, in Laguna for proper management.

According to the “Safe PCB and E-Waste Management Project” website, “e-waste, also referred to as waste electrical and electronic equipment (WEEE), if improperly managed, such as through improper dismantling, burning or disposal can result in the release of harmful chemicals into the environment, among which is Polybrominated Diphenyl Ethers (PBDEs).”

PBDEs from the mother’s body can also be transferred to the infant through the breastmilk, noting however that breastmilk is still best and breastfeeding provides tremendous benefits to both mother and child.

PBDEs are a class of extremely toxic chemicals targeted for global elimination under the Stockholm Convention on Persistent Organic Pollutants (POPs) of which the Philippines is a state party.