EcoWaste Coalition Says Minimal to Intense Littering in Cemeteries Persists (Group Calls Out ‘Trashers of the Tombs,’ Commends Others for Not Leaving Litter Behind) 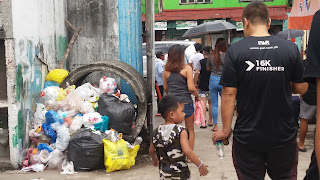 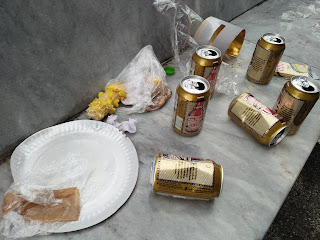 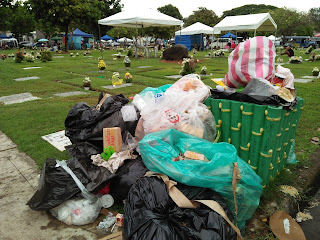 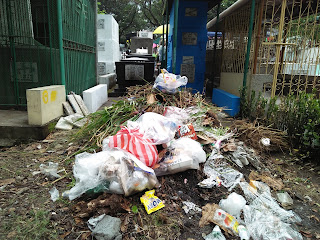 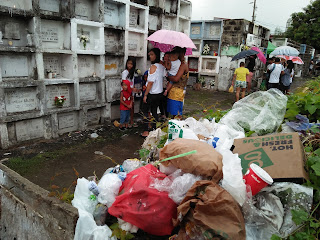 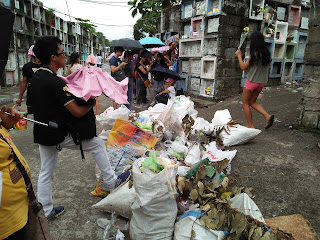 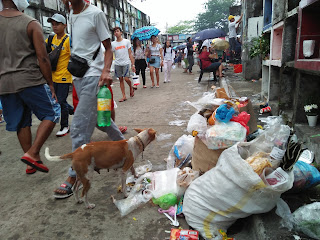 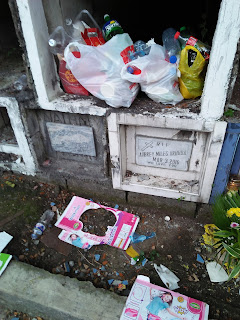 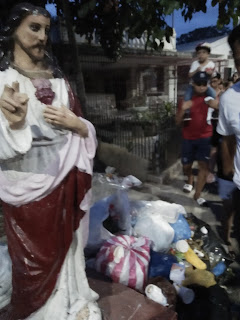 The EcoWaste Coalition, a green advocacy group for a zero waste and toxics-free society, applauded cemetery visitors for not leaving trash on gravesites even as it called out the “trashers of the tombs” --- or those who leave their garbage behind --- for disrespecting the dead.

“We laud caring Filipinos for leaving flowers and prayers - not trash - at the graves of their dearly departed relatives and friends.  This should be the rule rather than the exception as millions gather every year in cemeteries to remember and pray for them,” said Jove Benosa, Zero Waste Campaigner, EcoWaste Coalition.

“We hope the ‘trashers of the tombs’ will make amends by not leaving their rubbish behind next time around.  By keeping the graveyards clean, we show our utmost respect to the dead and the living and Mother Earth, too,” he added.

According to field reports received from the group’s Basura Patrollers, minimal to intense littering was observed in 17 cemeteries in Caloocan, Makati, Mandaluyong, Manila, Marikina, Parañaque, Pasay, Quezon and San Juan Cities, as well as in Legazpi City in the Bicol Region.

Bagbag Public Cemetery stuck out as the most littered burial ground in Metro Manila with garbage strewn all over the place.  Littering in this cemetery in Quezon City has been characterized as “intense” with visitors literally walking over or sitting next to garbage.

With the ban on vendors in place, the EcoWaste Coalition observed visible reduction of food packaging waste inside the Manila North and South Cemeteries.  However, some visitors simply abandoned their discards such as heaping up bags of trash with no sense of shame at the statue of the Sacred Heart of Jesus in the main road of Manila North Cemetery, the group lamented.

The situation in private cemeteries was similarly wasteful with bins overflowing with discards, especially single-use paper and plastic packaging from food concessionaires, a common sight at the Manila Memorial Park in Parañaque and Quezon Cities.  While alcoholic drinks are banned, some visitors sneaked some canned beers through the tight security of Manila Memorial Park (Parañaque) leaving the empty cans at the Columbarium area.

While critical of the “trashers of the tombs,” the EcoWaste Coalition complimented people for picking up recyclables from garbage bins and mounds, especially the roving members of the informal waste sector and the Tzu Chi volunteers.

The group also lauded the hundreds of personnel deployed by the various city governments, the Metro Manila Development Authority, and the management of public and private cemeteries for working around the clock to keep the gravesites clean and the visitors safe from dirt and harm.

To prevent the generation of Undas garbage, the EcoWaste Coalition called on all local government units and cemetery administrators to enforce good practices in waste prevention and reduction as laid out in their respective Ecological Solid Waste Management (ESWM) Plans.

"The garbage situation in all cemeteries will further improve next year if preventive measures are effectively carried out, including enjoining all visitors to bring their discards home and declaring cemeteries as plastic-free zone, especially for single-use plastics such as plastic carry bags, plates, cups, cutlery, drinking bottles, straws, stirrers and Styrofoam containers," the EcoWaste Coalition said.