“If the Canadian wastes will not leave our ports today, when?” (Group Disappointed with Non-Compliance to the May 15 Deadline for the Re-Export of Canadian Garbage) 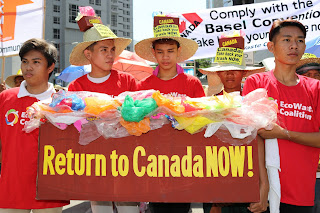 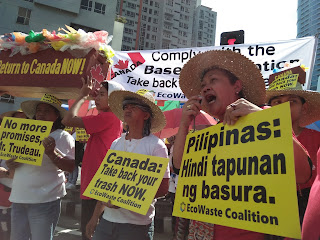 The waste and pollution watch group EcoWaste Coalition has expressed its gross disappointment over the non-departure today of the rotting Canadian wastes in 69 container vans that have been sitting in Manila and Subic ports for about six years.

“We are grossly disappointed that the illegal garbage imports from Canada have yet to take their trip back home,” said Aileen Lucero, National Coordinator, EcoWaste Coalition.  “If the Canadian wastes will not leave our ports today, when?”

“We remain hopeful that this prolonged garbage feud will be over soon as this is what the chief executive and the entire nation want,” she said.

To recall, President Rodrigo Duterte on April 23 chastised Canada for its inaction and threatened “war” against the North American country for the nearly 2,450 tons of mostly residual garbage illegally shipped to the Philippines from 2013 to 2104 in violation of the Basel Convention.

“We are counting on Canada’s full cooperation in fulfillment of its obligations under the Basel Convention to take back the illegal traffic wastes  that were shipped from the  Port of Vancouver,” she added.

According to the Department of Finance, “bureaucratic red tape in the Canadian government has slowed down the process of re-exporting the trash back to their country.”

“As the re-export of the Canadian garbage is no ordinary transaction that can be delayed, we wrote to Prime Minister Justin Trudeau to appeal for the expedited processing of the import permits,” said Lucero.

“We appeal to your government to give priority consideration to the processing of the required documents such as the import permits,” wrote Lucero to Trudeau last May 7.

“The removal of your wastes in our land will put this long standing dumping controversy to a close, and open up a new chapter in our nations' bilateral relations,” she told Trudeau.

On May 10, in response to the EcoWaste Coalition’s letter, M. Bredeson, Executive Correspondence Officer for the Prime Minister’s Office, said: “Please be assured that your comments have been carefully noted. As your email has also been sent to the Honourable Catherine McKenna, Minister of Environment and Climate Change, I am certain that she will have appreciated receiving this information.”

As soon as the re-export date has been confirmed, the EcoWaste Coalition will organize a send-off activity themed "Never Again" to celebrate what it considers as a people's victory for the rule of law and environmental justice.