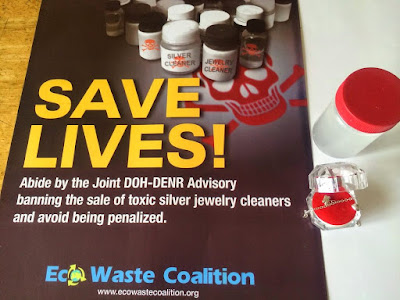 A seven-year old boy from Makati City has become the latest victim in a string of tragic deaths linked to the ingestion of cyanide-containing silver jewelry cleaner.

Rain Mendoza of Barangay Rizal accidentally drank a silver cleaning solution placed on a soft drink bottle on Wednesday morning.  His parents Jennifer and Sherwin believed the boy had mistaken it for a soda and drank it.

His younger brother Prince saw him lying unconscious on the toilet floor as if having a convulsion.   Concerned neighbors then rushed him to the Ospital ng Makati in nearby Barangay Pembo where he was given medical attention at the Pediatric Intensive Care Unit.

Thony Dizon, Chemical Safety Campaigner, EcoWaste Coalition went to the home of the Mendozas on Friday morning to commiserate with the grieving family.  Dizon’s group has been campaigning against the deadly silver jewelry cleaner since 2009.

“We urge the authorities to conduct sustained law enforcement operations to rid the marketplace of silver jewelry cleaners containing cyanide and other toxic substances,” stated Dizon.

“Any lapse in law enforcement will mean more consumers having access to this poison that had already fatally harmed many people, including children” he added.

The group likewise reiterated its advice to the public not to buy and use unregistered silver jewelry cleaning products with cyanide and other toxic chemical ingredients.
According to the Food and Drug Administration (FDA), cyanide “is classified as poisonous which can be rapidly absorbed by the body through inhalation, ingestion and dermal absorption.”

“It blocks utilization of oxygen in all organs and liable to cause serious injury to human health that may lead to acute poisoning or death,” the FDA said.