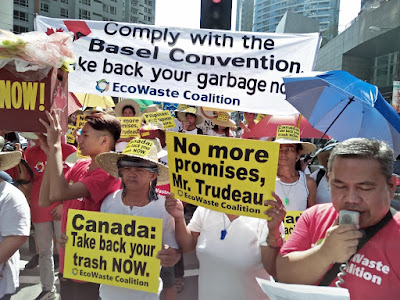 The environmental health and justice group EcoWaste Coalition welcomed the assurance made by the Canadian government to cover all the expenses for the re-export of their garbage back to where it came from.

Presidential Spokesperson Salvador Panelo on Tuesday stated: “On the issue of garbage from Canada, the Department of Foreign Affairs and the Department of Environment and Natural Resources noted that the Canadian government is committed to shouldering all the expenses to ship out all the 69 waste containers.”

Last week, in reaction to Canada's formal offer to take back their garbage, the EcoWaste Coalition commented that "prudence and the law dictate that the Canadian government should cover the cost of the repatriation of its waste, including the reimbursement of the expenses of the Philippine government for holding it for many years."

“We welcome Canada’s assurance that it will bear all the necessary expenses toward the removal of their garbage out of the Philippines,” said Aileen Lucero, National Coordinator, EcoWaste Coalition.

“Being the State of export, Canada has the legal, moral and financial responsibility to take back their trash, as well as ensure just reparation for the pollution caused by this illegal waste trafficking,” she pointed out.

“We’re keeping our fingers crossed that the May 15 deadline for the re-export of the Canadian garbage will be realized.  We look forward to that joyful day when the unlawful waste imports are finally sent back for environmentally-sound disposal in Canada.  This will be a triumph for the rule of law and environmental justice,” she concluded.

The Basel Convention on the Control of Transboundary Movements of Hazardous Wastes and Their Disposal, which lists Canada and the Philippines among the state parties, explicitly stipulates that parties “shall not oppose, hinder or prevent the return of those wastes to the State of export.”

The Philippine government notified Canada about the illegal waste traffic as early as March 2014, and have sought Canada’s assistance in returning the wastes.

In the meanwhile, the EcoWaste Coalition urged the Bureau of Customs (BOC) to clarify how the wastes from eight of the 103 container vans of Canadian garbage were locally disposed of, noting that only 26 containers were disposed of at the Metro Clark landfill in Capas, Tarlac in 2015.

According to the information received by the EcoWaste Coalition from the BOC in response to its query, Chronic Inc. exported 103 container vans in several batches to two Philippine-based companies, Chronic Plastic and Live Green Enterprise, from 2013 to 2014.

Out of the 103 containers, 34 were locally disposed of, the BOC said.

"We are keen to know what happened to the Canadian wastes from the 8 containers.  The authorities need to tell the public when, where and how the wastes were disposed of and who paid for their disposal.  We, the people, have the right to know," Lucero said.