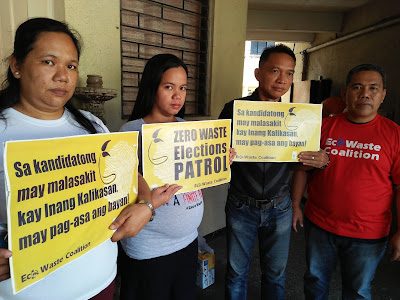 A waste and pollution watch group dared all political parties, party-list groups and individuals taking part in the midterm polls to protect the environment from being defiled further by irresponsible campaign activities.

The EcoWaste Coalition urged parties and candidates to “green” both their electoral platform and campaign strategy ahead of the start of the official campaign period this Tuesday for senatorial bets and party-list groups,

“We dare all political parties and candidates to incorporate ecological sustainability into their electoral platforms.  We challenge them to present green solutions to the electorate that will address our nation’s problems with environmental degradation, dirty energy and climate change, chemicals and wastes, including the plastic pollution crisis,” said Daniel Alejandre, Zero Waste Campaigner, EcoWaste Coalition.

“Politicians should tell the public where they stand with regards to burning environmental issues such as single-use plastics and plastic packaging, electronic and plastic waste importation, dumpsite closure, waste-to-energy incineration, among other concerns,” he said.

“We further ask them to show their concern for Mother Earth by rolling out an eco-friendly campaign that will not harm and pollute the ecosystems,” he added.

Instead of the usual  4Gs (guns, goons, gold and garbage) of dirty politics, the group urged politicians and their backers to embrace the 4Rs (reduce, reuse, recycle, respect) of clean politics.

For a cleaner campaign, the group pushed for compliance to COMELEC Resolution 10488 providing for the rules and regulations implementing Republic Act 9006, or the Fair Election Act, in connection with the May 13, 2019 national and local elections.

The group specifically drew attention to Section 6 on “lawful election propaganda” in the said resolution where “parties and candidates are encouraged to use recyclable and environment-friendly materials and avoid those that contain hazardous chemicals and substances in the production of their campaign and election propaganda.”

The resolution also asked parties and candidates to comply with local ordinances governing the use of plastic and other similar materials.

As currently no law bars the use of cadmium-laden plastic tarpaulins, the group can only appeal to parties and candidates to keep their campaign tarpaulins within proper limits and to ensure that such materials will be taken down as soon as the polls are over for environmentally-sound management.

Following the Okada balloon drop controversy, the EcoWaste Coalition asked parties and candidates not to engage in any balloon dropping or releasing gimmicks and other activities that will only add to the country’s environmental woes, including throwing confetti and lighting firecrackers and fireworks during political sorties and meetings.