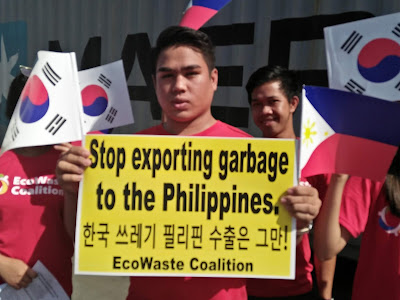 Based on the information sent by MICT Port Collector John Simon to the EcoWaste Coalition, M/V Spectrum, the marine vessel carrying the garbage shipments, arrived this morning at the Pyeongtaek Container Terminal (PCTC).

As confirmed by the PCTC website, the actual time of berth (ATB) of M/V Spectrum was at 9:03 a.m. today.

The arrival in Pyeongtaek City of the first batch of returned Korean garbage amounting to 1,400 tons drew cheers from the EcoWaste Coalition, a non-profit waste and pollution watch group in the Philippines.

“We mark this occasion as a special day to celebrate the rule of law and the reign of environmental justice, and we thank the governments and peoples of the Philippines and South Korea for making this happen,” said Aileen Lucero, National Coordinator, EcoWaste Coalition.

“The unloading of the botched garbage shipments from M/V Spectrum provides a solid proof that doing the right thing for public health and the environment is not impossible,” she said.

“However, this landmark victory is still incomplete as bulk of the dumped garbage, over 5,100 tons, are still stranded in the town of Tagoloan, Misamis Oriental posing health and environmental hazards,” she pointed out.

The group had earlier written to Ambassador Han Dong-man last January 15 to thank South Korea for its expeditious response, and to urge it to continue its positive collaboration with the Philippine authorities to ensure the speedy re-export of the remaining garbage.

In their letter, the EcoWaste Coalition also expressed its objection to “any move to delay the repatriation of the illegal garbage cargoes or to have (them) treated or disposed of in the Philippines.”

“For the last six months, the waste materials dumped in Tagoloan have been exposed to direct sunlight and rain.  Many of the bags are now damaged and have to be replaced in preparation for their re-export to South Korea,” Lucero said.

“To speed up their re-export, we request the South Korean government to intercede and assume responsibility for their re-bagging as the consignee has failed to do its job due to alleged lack of resources,” she added.

It will be recalled that in July 2018, a boatload of plastic waste materials arrived at the MICT in Tagoloan, Misamis Oriental.  The waste shipments, wrongly declared as “plastic synthetic flakes,” were exported by the Korean company Green Soko and consigned to a Filipino-Korean company Verde Soko.

Another batch of similar mixed waste cargoes entered the same port in October 2018 bringing the total shipments to 6,500 tons.  Last January 14, 51 containers, or about 1,400 tons of garbage, left MICT for PCTC.

The garbage shipments violated Philippine and South Korean laws, as well as international law via the Basel Convention on the Control of Transboundary Movements of Hazardous Wastes and Their Disposal.