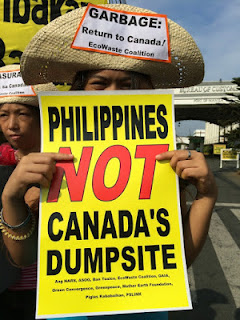 Canadian and international environmental, health and human rights organizations have taken up the cudgel for the EcoWaste Coalition in its latest bid to get the reeking garbage from Vancouver returned to its source. Canada illegally dumped the waste in the Philippines in 2013 - 2014.

On January 30, 2019, the EcoWaste Coalition sent a letter to Prime Minister Justin Trudeau and Environment Minister Catherine McKenna urging the Canadian government to resolve the dumping scandal involving 103 containers of mixed garbage shipments, approximately 2,500 tons, which has dragged on for five years without resolution. Neither government official has yet responded to the EcoWaste Coalition letter.

“The dumping of Canadian wastes in the Philippines is immoral and illegal. We respectfully request that the Canadian government provide a clear and definite date by which it will repatriate its garbage so that this protracted ordeal can finally be promptly ended,” wrote Aileen Lucero, National Coordinator, EcoWaste Coalition.

“Prime Minister Trudeau has promised that Canada will act in an environmentally responsible manner and fulfill its obligations under the Basel Convention, which forbids dumping wastes overseas. Words are not enough. South Korea has acted on the first part of its wastes and after five long years of delay, it is time for the Canadian government to demonstrate commitment to international environmental law and take back its wastes.  Environmentalists in Canada and around the world are calling on PM Trudeau to take action now to end this shameful misconduct,” said Kathleen Ruff, Director of the human rights group RightOnCanada.

Through a letter sent to Trudeau, as well as to the leaders of Canada’s Conservative Party, New Democratic Party, Bloc Québécois and Green Party, tenCanadian and international organizations, as well as a number of health and environmental experts, have expressed their strong support for the appeal made by the EcoWaste Coalition.

“We call on you to take the following actions they (the EcoWaste Coalition) have requested: 1) ensure the expeditious return to Canada of the wastes illegally exported from Canada and dumped in the Philippines, as is required by the Basel Convention, and 2) ratify the Basel Ban amendment, which would prohibit the export of hazardous waste for any reason from more developed countries to less developed countries,” the signatories said.

“We call on you to demonstrate commitment to the Basel Convention and fulfill the actions requested by the EcoWaste Coalition,” they stated, stressing that the said treaty on the control of transboundary movements of hazardous waste and their disposal is an important UN agreement “to uphold environmental responsibility and environmental justice.”


The EcoWaste Coalition thanked the said groups and scientists for amplifying their call for decisive Canadian action to settle the festering illegal dumping problem, describing their support as important for advancing the rule of law and environmental justice.