With the Brigada Eskwela in Full Swing: Schools Reminded to Observe Ban on Open Burning 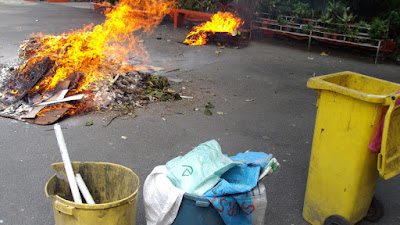 As the yearly Brigada Eskwela goes in full swing, a waste and pollution watch group reminded school heads and the general public to be mindful of the ban on the open burning of trash.

“Open burning is prohibited under the country’s pollution prevention laws, particularly R.A. 9003 and R.A. 8749 and must be strictly observed to save valuable resources from turning into smoke and ash, and to avoid the discharge of air toxins that can endanger human health,” said Daniel Alejandre, Zero Waste Campaigner, EcoWaste Coalition.

“Unknown to many, the burning of garbage, especially chlorinated waste materials, produces highly hazardous by-product pollutants such as dioxins and furans, which are dangerous to human health even at low levels,” Alejandre said.

These pollutants are known to cause a range of health effects, including headaches, eye, throat and skin irritation, impaired respiratory functions, aggravated asthma and chronic bronchitis, heart attacks and cancers, the group said.

For a healthier and safer Brigada Eskwela, the EcoWaste Coalition urged schools to observe the following pollution prevention and reduction tips:

1.  Repair rather than junk, dispose of or replace broken school essentials.

2.  Share unwanted stuff with others instead of burning or tossing them to the bins.

3.  Sort, do not mix, discards from cleanup efforts.

4.  Reuse, repurpose, and recycle non-biodegradable discards like paper, cardboard, bottle and can.

6.  Avoid dry sanding, dry scraping and other improper methods of removing lead-painted surfaces to prevent the spread of lead dust.

Observing ecological waste management principles and practices during the Brigada Eskwela and beyond will be beneficial to public health and the environment, the EcoWaste Coalition noted.

It will be in keeping with DepEd’s Department Order No.5, series of 2014, which, among other things, highlights the role of public schools in the promotion and implementation of R.A. 9003, including waste minimization, segregation at source, reduction, recycling, reusing and composting, the group said.

It will also support the country’s efforts to prevent and reduce the formation of dioxins and other toxic by-products of waste combustion in line with the goals of the Stockholm Convention on Persistent Organic Pollutants (POPs) of which the Philippines is a state party.