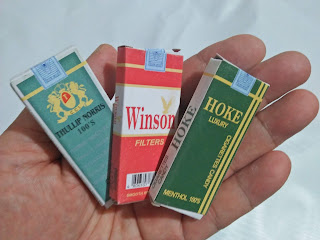 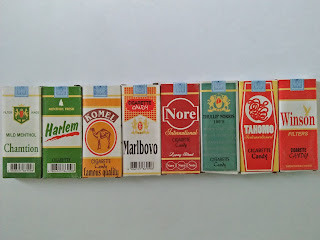 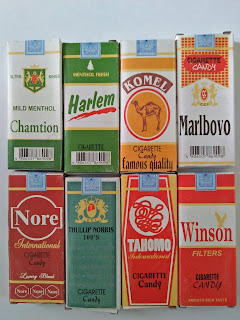 Two health and environmental networks deplored the sale of candy products imitating the names and packaging of cigarette brands for subliminally encouraging kids to smoke.

As the 2018 World No Tobacco Day is observed on May 31, the Framework Convention on Tobacco Control Alliance, Philippines (FCAP) and the EcoWaste Coalition expressed strong disapproval over the sale of candy cigarettes and asked the authorities to rid the market of such products.

FCAP and the EcoWaste Coalition called for a government’s crackdown on candy cigarettes after the latter procured cheap white chalky candy sticks in small boxes resembling tobacco brands and packaging from a candy wholesaler at a public market in .

The candy cigarettes, which are not registered with the Food and Drug Administration (FDA), are sold for P22 per package of 24 packs and bear the names of Chamption, , Hoke, Komel, Marlbovo, Nore, Thullip Norris, Tahomo and Winson.

“Candy cigarettes desensitize children to the dangers of smoking, falsely instilling in their impressionable minds that smoking is harmless.  Such a subliminal promotion of tobacco use entices children to try smoking and must be stopped to save our children from cigarette addiction later in life,” stated Dr. Maricar Limpin, Executive Director, FCAP.

“The sale of candy cigarettes, which makes smoking looks cool in the eyes of a child, undermines the public health objective of cutting tobacco use among the Filipino youth.  Action is needed to halt this irresponsible marketing gimmick that can influence a child to get hooked on smoking in the future,” said Thony Dizon, Chemical Safety Campaigner,  EcoWaste Coalition.

FCAP and the EcoWaste Coalition emphasized that the prohibition on candies resembling cigarette branding will help in reducing tobacco consumption in Filipino children and youth.

The crackdown on candy cigarettes, the groups said, will be in line with FDA Advisory 2018-08 issued January 23 warning the public against the purchase and use of unregistered candy cigarettes and requesting local government units and law enforcement agencies to ensure that such products are not sold in their localities or areas of jurisdiction.

“The public is advised not to purchase and use these candy products or any other food products that resemble the packaging and labeling of cigarette brands, as these might encourage smoking to the consumers, especially children,” the FDA advisory pointed out.

For FCAP and the EcoWaste Coalition, the removal of candy cigarettes from the market will boost the country’s ongoing programs to curb tobacco addiction, a leading cause of illness, death and impoverishment.

Tobacco epidemic, according to the World Health Organization (WHO), kills more than seven million people a year, of which over 6 million of those deaths are due to direct tobacco use and around 890,000 are due to non-smokers being exposed to second-hand smoke.

According to the WHO, tobacco waste contains over 7,000 chemicals that poison the environment and that tobacco smoke emissions contribute thousands of tons of human carcinogens, toxicants and greenhouse gases to the environment, with cigarette butts accounting for the largest type of litter by count globally.

Posted by EcoWaste Coalition at Wednesday, May 30, 2018