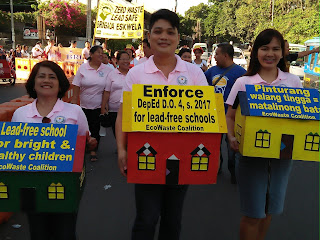 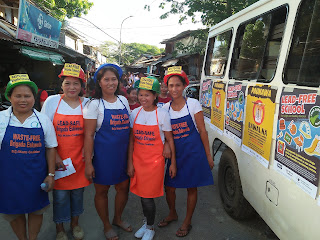 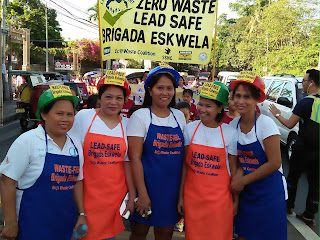 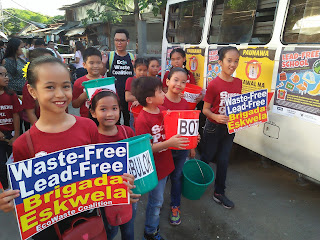 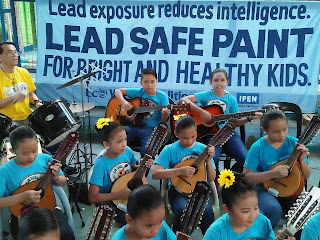 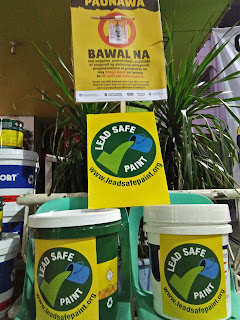 School officials, parents, teachers, students and environmental advocates from the EcoWaste Coalition pitch for waste-free and lead-safe school cleanup, repair and renovation activities at the launch of the annual Brigada Eskwela at San Vicente Elementary School in Quezon City.

As the annual Brigada Eskwela of the Department of Education (DepEd) gets underway, a waste and pollution watch group exhorted all participants to work in concert to ensure a healthy and safe school environment that is conducive to children’s learning and development.
At the festive launch of the Brigada Eskwela at San Vicente Elementary School (SVES) in Quezon City, the EcoWaste Coalition pitched for practical measures to prevent environmental pollution during the week-long cleanup, repair, and renovation of school facilities.

The group teamed up with the SVES and the Pacific Paint (Boysen) Philippines, Inc., which provided certified lead-safe Boysen and Nation paints, to stir up awareness and compliance with DepEd’s environmental policies towards a pollution-free Brigada Eskwela.

“Our effort to make this year’s Brigada Eskwela more eco-friendly, we hope, will result to a cleaner and safer school environment that our students and teachers deserve to enjoyall-year round,” stated Antonio Miranda, Principal, SVES.

Speaking at the Brigada Eskwela launch, EcoWaste Coalition campaigners pointed out that school heads and other Brigada Eskwela partakers should be on their guard against the improper disposal of discards and the inappropriate use of lead-containing paints.

“The entry and use of lead-containing paints should be strictly forbidden to avoid creating a lead poisoning hazard within the school premises that DepEd is aiming to avert with the issuance of directives requiring the mandatory use of lead-safe paints,” said Thony Dizon, Chemical Safety Campaigner, EcoWaste Coalition.

For his part, Daniel Alejandre, Zero Waste Campaigner, EcoWaste Coalition, said: “The open dumping and burning of discards from the school-wide cleanup operations should not be allowed as these polluting practices go against DepEd’s commitment to put ecological waste management into effect in schools all over the country.”

Alejandre cited DepEd Department Order 5, series of 2014, which among other provisions, enjoins schools to conduct waste prevention and reduction activities, including enforcing the prohibition on littering and burning of trash, in line with Republic Act 9003, or the Ecological Solid Waste Management Act.

For a healthier and safer Brigada Eskwela, the EcoWaste Coalition urged participants to consider the following suggestions:


1.  Sort discards at source instead of mixing them altogether.
2.  Compost biodegradable discards, and reuse, repurpose and recycle the rest.
3.  Say no to open dumping and open burning.

9.  Use reusable or recyclable containers for volunteers’ drinks and foods.
10.  Wash hands properly with soap and water before meals and after the work is done.