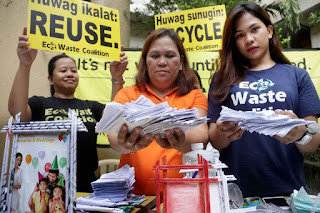 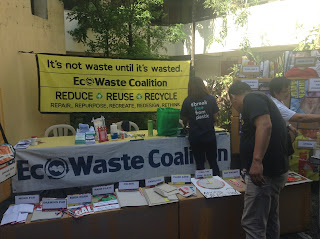 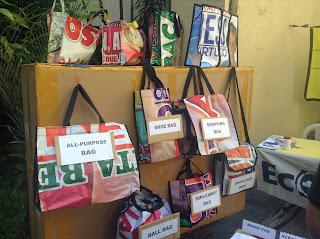 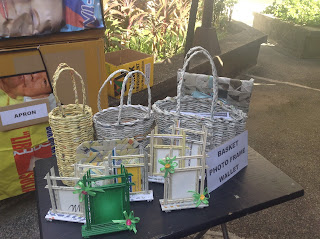 Now that the people have spoken through ballots cast in yesterday's Barangay and Sangguniang Kabataan polls, the EcoWaste Coalition today drew attention to a practical opportunity for citizens to trim down campaign trash disposal through creative and safe recycling.

Instead of dumping or burning campaign discards, the zero waste advocacy group urged the public to think out of the box and find ways to extend the life of used campaign materials such as leaflets, sample ballots, and posters.

"Reusing, repurposing or recycling the campaign materials will conserve valuable resources from being wasted, while reducing the volume of discards requiring disposal and its associated costs," he said.

To foster creative and safe recycling, the EcoWaste Coalition today organized a simple DIY (do it yourself) event featuring innovative and functional ways of reusing campaign materials.

With the re-opening of classes just around the corner, cardboard posters can be transformed into useful school supplies like book cover, bookmarks. envelopes, folders and name plates, as well as teaching aids like flash cards and "tell the time" clock.

With some imagination, cardboard posters can be made into decorative items like picture and mirror frames and ref magnets.

Candidates' publicity flyers and sample ballots can be turned into drawing, memo or scratch pads.

As for the ubiquitous plastic tarpaulins, these sturdy campaign materials can be sewn into various types of bags, aprons, and organizers for carpentry and garden tools, letters and bills, etc.

In addition, tarpaulins can also be reused as a sunshade for jeepneys, tricycles and pedicabs, or as a canopy for homes and shops.

However, plastic tarpaulins should only be repurposed for non-food and non-child applications as these often contain toxic additives such as cadmium, which may leach and contaminate the food or expose children to chemical hazards," reminded Alejandre who also noted that repurposing such  tarpaulins as a stop gap measure.

The EcoWaste Coalition had earlier advised poll candidates to use eco-friendly campaign materials, and to avoid those that contain hazardous substances such as cadmium-laden tarpaulins.