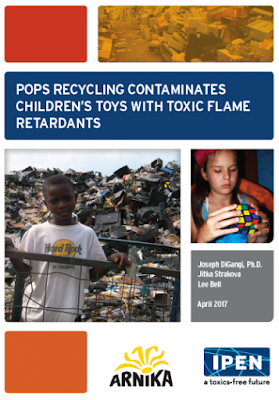 A new global survey finds that recycling plastics containing toxic flame retardant chemicals found in electronic waste results in contamination of the world’s best-selling toy along with other children’s products.

Ironically, the chemical contaminants can damage the nervous system and reduce intellectual capacity but are found in mostly imitation Rubik’s Cubes – a puzzle toy designed to exercise the mind.

The study was performed by IPEN (a global civil society network) and Arnika (an environmental organization in the ) in cooperation with partner groups from 26 countries, including the EcoWaste Coalition from the .

The study was released just a few days before the eight Conference of the Parties (COP8) to the Stockholm Convention on Persistent Organic Pollutants (POPs) will decide whether to continue allowing the recycling of materials containing OctaBDE and possibly make a new recycling exemption for DecaBDE. The treaty’s expert committee has warned against the practice.

According to the study,  90% of the samples contained OctaBDE or DecaBDE, and 43% contained HBCD. These chemicals are persistent and known to harm the reproductive system and disrupt hormone systems, adversely impacting intelligence, attention, learning and memory.

“Materials containing toxic flame retardant chemicals such as OctaBDE and DecaBDE should not be ‘recycled’ into children’s toys,” said Thony Dizon, Coordinator of the EcoWaste Coalition’s Project Protect.

At a meeting with the Environmental Management Bureau and other stakeholders last Tuesday, April 18, the EcoWaste Coalition requested the Philippine delegation to push for the end of toxic recycling exemption for brominated diphenyl ethers in the Stockholm Convention.

The application of strict hazardous limits is also critical for brominated flame retardants due to their presence in e-waste.

The report can be accessed here: