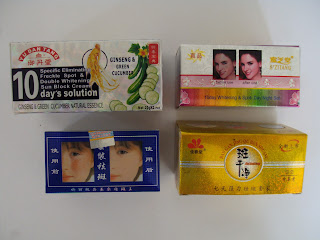 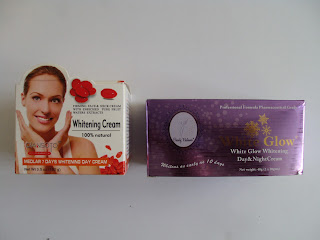 Two unnotified skin whitening cosmetics on sale in the market.

Toxic mercury in some skin lightening products is a problem that will not simply go away.

“Cosmetic manufacturers, for sure, are aware of the prohibition on mercury in cosmetic formulations, which even got a global boost when the Minamata Convention on Mercury was signed in 2013,” he stated.

“We urge them and their local importers, distributors and dealers to stop the illegal trade in mercury-containing cosmetics now and for the last time, and support the early implementation of the mercury treaty,” he said.

“The treaty targets, among other things, the phase out of mercury in products such as skin lightening cosmetics with mercury above one part per million (ppm),”  he added.

“We likewise urge the Bureau of Customs to take stern measures to halt the entry of contraband cosmetics in the country’s ports,” he further said.

As part of the EcoWaste Coalition’s campaign to inform the public about the dangers of mercury and to support the Philippine ratification of the Minamata Convention, the group conducted yet another sampling of skin whitening cosmetics in the marketplace.

Last Sunday, the group bought six brands of skin whitening cosmetics imported from China and Taiwan for P60 to P150 each from mostly Chinese drug stores in Divisoria, Manila.

Four of the samples showed high concentrations of mercury exceeding the one ppm limit under the ASEAN Cosmetic Directive.  Mercury and its compounds must not form part of the composition of cosmetic products, according to the directive.

These products were among the over 135 skin lightening cosmetics banned by the Food and Drug Administration (FDA) for containing mercury since 2010. Jiachuntang was the most recent to be banned by the agency in August 2016.

Eighty of these banned items were among those discovered by the EcoWaste Coalition during its periodic test buys in Metro Manila and other urban hubs across the country.

The other two products (Himalayan Goji Whitening Cream and White Glow Whitening Day and Night Cream) were found negative for mercury, but have no cosmetic product notifications from the FDA and should not be offered for sale.

According to the FDA, “there have been cases of adverse health effects brought about by highly toxic mercury in cosmetic products, such as kidney damage, skin rashes, skin discoloration and scarring.”

“Chronic use (of mercury-containing skin cosmetics) reduces the skin's normal resistance against bacterial and fungal infections. Other effects include anxiety, depression or psychosis and peripheral neuropathy,” the FDA said.

“The transfer of mercury to fetuses of pregnant women may manifest as neurodevelopment deficits later in life,” it further warned.