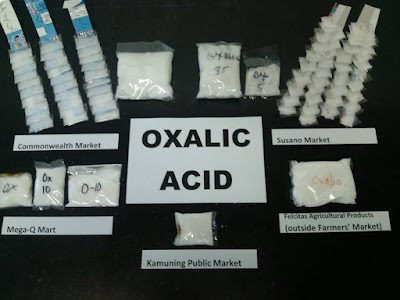 Quezon City.  An ordinance filed by Quezon City District 1 Councilor Dorothy Delarmente that will regulate the sale of oxalic acid has gained support ahead of the scheduled public hearing on June 11.

The EcoWaste Coalition, an advocate for chemical safety and zero waste, welcomed the move to restrict retail sale of the white powdery anti-bacterial and bleaching compound that has been tagged in the infamous milk tea poisoning in Manila last April.

The group threw its support behind the said ordinance after it went market-hopping yesterday, June 6, to investigate on how oxalic acid is currently sold in the city.

From Susano Market in Novaliches, the group went to Commonwealth Market, Mega-Q-Mart, Farmers’ Market and then to Kamuning Public Market to buy packets of oxalic acid from stall vendors as well as sidewalk hawkers.

“We find the way repacked oxalic acid is sold by market vendors truly alarming and shocking as if it is not a corrosive and poisonous substance,” stated  Thony Dizon, Coordinator of the EcoWaste Coalition’s Project Protect.

“Repacked oxalic acid is offered for sale in clear plastics with no information about its usage and the precautions to be observed when using it.  In most cases, the letter “O”, “ox” or the word “oxalic” written on the packet is its sole identifying mark,” he said.

“This poison comes very cheap from as low as 25 cents for the smallest packet to 5, 10 and 35 pesos for the bigger ones,” he added.

“Despite being a dangerous substance, which can be mistaken for salt or sugar, we found oxalic acid being sold along with condiments and food items,” he noted.

To strengthen the draft ordinance, the EcoWaste Coalition proposed the outright prohibition on the sale of oxalic acid in markets and streets and not only in sari-sari stores and unauthorized establishments, noting the unchecked sale of the poisonous substance by market and
street vendors.

The group also hinted on the need to raise the penalties set at one to three months of imprisonment or a fine of not less than 5,000 pesos to deter would-be violators.

“As the misuse of oxalic acid could result in serious injury and death, we find it necessary for the City Government to impose tougher penalties on offenders,” Dizon said.

The group likewise indicated the need to seek the advice of national agencies, particularly the Department of Environment and Natural Resources and the Department of Health, to confirm if the sale of oxalic acid for non-industrial applications should be allowed at all or banned altogether.

ArtikelArul said…
I am very happy to read the information on the prohibition of products using oxalic acid in beauty products.
It is inconceivable, how many millions of people who have used cosmetic products to date?
If 1 percent of the 1 million people use the product with the basic ingredients are harmful, then it is very alarming.
Thanks for sharing.
Sunday, June 07, 2015