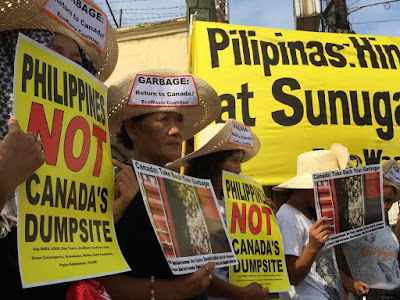 Environmental groups today vowed to step up the pressure to both the governments of Canada and the Philippines to fairly and speedily solve the problem with the illegal garbage shipments from Canada, now totalling 98, that are languishing in Manila and Subic ports.

The EcoWaste Coalition and the Green Convergence for Safe Food, Healthy Environment and Sustainable Economy (Green Convergence) issued the statement coinciding with the second anniversary of the arrival of the first batch of Canadian garbage consignments on June 23, 2013

“We need to muster extra vigilance to compel Canada to take back their garbage and bring this scandalous smuggling of trash masquerading as ‘recycling’ to a close,” said Aileen Lucero, Coordinator, EcoWaste Coalition.

“Traders of recyclables must ensure that only clean and properly segregated materials are sent here for non-toxic recycling, and not for disposal in landfills or other facilities.  The Philippines is no disposal site for global garbage,” she said.

Lucero expressed concern that dirty shipments that could not enter China due to their enforcement of more stringent regulations in 2013 might be being diverted to the Philippines.  “We should recognize this threat and act decisively to stop it,” she said.

To address the problem with the trade of low-quality imports that are supposedly used by the domestic recycling industry, the EcoWaste Coalition urged the government and the industry to step up the collection of locally-generated plastic wastes that are available in large quantities for clean recycling.

It also asked the government to study and, if suitable, replicate China’s “Green Fence” policy adopted in 2013, which, to some extent, prevented dirty and poorly sorted  “recyclable” waste materials from entering the country, forcing companies to comply with the waste quality requirements and upgrade their operations to control environmental pollution.

In 2013, 50 container vans of heterogenous garbage materials, mostly residual plastics that can no longer be recycled, reached Manila in six batches with the first batch arriving on June 23 and the last batch on August 21.

The Bureau of Customs (BOC), in coordination with the Environmental Management Bureau (EMB), has since impounded the illegal shipments, filing a smuggling complaint against Chronic Plastics, Inc., the consignee based in Valenzuela City, for breach of the Tariff and Customs Code and R.A. 6969, the Toxic Substances and Hazardous and Nuclear Wastes Control Act.

As the problem heats up with Canada’s unbending refusal to take back their garbage despite appeals from legislative, church, labor and civil society leaders, as well as from over 25,000 Canadian and Filipino citizens, the BOC uncovered yet another dubious shipments of plastic scraps.

The BOC reported that 48 unclaimed container vans of plastic scraps from Canada, consigned to Live Green Enterprise based in San Fernando City, Pampanga, entered the country in four batches in December 2013 to January 2014.

Subsequent waste analysis and characterization study conducted by the EMB last Friday showed that the latest garbage shipments of 48 container vans were “basically the same” as the previous 50 container vans, consisting of heterogenous plastic materials and other wastes.