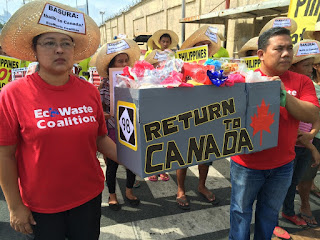 The EcoWaste Coalition, an environmental network promoting chemical safety and zero waste, asked the Bureau of Customs (BOC) to divulge the contents of the 48 unclaimed container vans of “plastic scraps” imported from Canada.

According to the BOC, the 48 container vans arrived in four batches between December 2013 to January 2014 and have remained unclaimed at the Manila International Container Port. The shipments are consigned to Live Green Enterprise based in San Fernando City, Pampanga.

The BOC is supposed to issue a decree of abandonment and conduct actual inspection of the unclaimed shipments, the EcoWaste Coalition pointed out.

“In the spirit of transparency, we request your office to disclose your findings so far. If the planned inspection has not yet taken place, we suggest that the inspection be conducted in the presence of the media and the civil society,” she said.

“The public is anxious to know what is inside those 48 container vans,” she emphasized.

“Would it be the same, or even worst, than what the authorities uncovered in the still unsettled case of illegal Canadian garbage shipments consisting of 50 container vans consigned to Chronic Plastics, Inc.?,” she asked.

Through a letter sent last Monday, the EcoWaste Coalition suggested to BOC Commissioner Alberto Lina to seriously look into garbage smuggling that is turning the Philippines into a global disposal site.

“We reiterate our request to the BOC to pay keen attention on the entry of materials described as ‘recyclable plastic scraps,’ which could be a smokescreen for the illegal entry of residual ‘wastes collected from households’ that are also covered under the ‘Basel Convention on the Transboundary Movements of Hazardous Wastes and Their Disposal’,” Lucero said.

“We recognize the role of the BOC, together with the Environmental Management Bureau, in ensuring compliance to the Basel Convention and our environmental laws such as R.A. 6969 and R.A. 9003,” she said.

R.A. 6969, or the “Toxic Substances and Hazardous and Nuclear Wastes Control Act of 1990, prohibits the “importation of hazardous and nuclear wastes in any part of the Philippines.”

R.A. 9003, or the “Ecological Solid Waste Management Act of 2000, prohibits the “importation of toxic wastes misrepresented as ‘recyclable’ or ‘with recyclable content’.”

The EcoWaste also urged the BOC to support the immediate return to Canada of all their illegal garbage shipments to the Philippines and to oppose any plan to have their garbage disposed of locally.