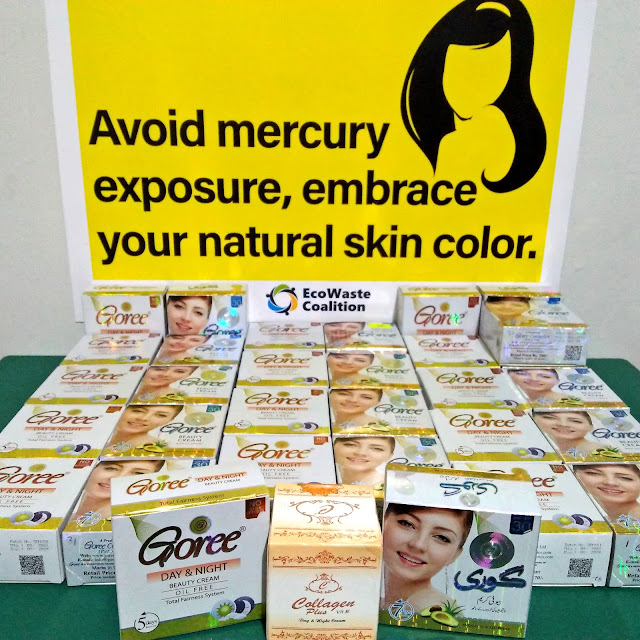 A toxics watchdog group has sounded the alarm over the sale in Western Visayas of imported facial creams with dangerously high levels of mercury, a harmful substance banned in cosmetics.
In a press statement, the EcoWaste Coalition revealed that it was able to buy mercury-laden Goree Beauty Cream with Lycopene and Goree Day & Night Beauty Cream from cosmetic stores in nine cities in the region despite a government-imposed ban since 2017.
"Our investigation shows that banned mercury-laden skin care products have penetrated the local cosmetic market in Western Visayas," said Aileen Lucero, National Coordinator, EcoWaste Coalition. "Local government, health and police authorities need to send off law enforcement teams without delay to confiscate the forbidden products and hold the culprits accountable."
In test buy operations conducted from May 14-17, the group purchased 31 samples of the said Goree products and one sample of Collagen Plus Vit E Day & Night Cream from cosmetic vendors in  Iloilo City, Iloilo Province; Roxas City, Capiz Province; and Bacolod, Escalante, Kabankalan, San Carlos, Silay, Talisay and Victorias Cities, Negros Occidental Province.
Goree samples costing P250-350 each and the lone Collagen Plus costing P99 were procured mostly from cosmetic product stores and stalls operating within the city centers, including those in public markets and shopping malls.
The samples were subsequently transported to the EcoWaste Coalition's headquarters in Quezon City for mercury screening using an  Olympus Vanta M Series X-Ray Fluorescence (XRF) analyzer.
Based on the XRF screening results, the analyzed 31 Goree samples were found positive for mercury in the range of 22,320 to 30,680 parts per million (ppm), way above the 1 ppm limit under the ASEAN Cosmetic Directive and the Minamata Convention in Mercury.  The Collagen night cream had 2,060 ppm of mercury (the day cream was negative for mercury).
It will be recalled that on October 30, 2017, the Food and Drug Administration (FDA) issued Advisory No. 2017-289 warning consumers against the purchase and use of the said Goree products due to their mercury content.  The FDA also issued a public health warning against the unauthorized Collagen Plus Vit E Day & Night Cream in 2017 and again in 2021.
International and national health authorities have warned that mercury-added skin lightening cosmetics are hazardous to health. Adverse health effects of exposure to mercury in such products include skin rashes, discoloration and scarring, and reduced skin's resistance to bacterial and fungal infections. Consumers have been warned that direct and prolonged exposure through the skin during repeated applications can cause damage to the brain, nervous system and kidneys.
The group will write to Bacolod City Mayor-elect Alfredo Benitez, re-elected Iloilo City Mayor Jerry Treñas and other local chief executives to notify them about this public health concern and to appeal for immediate law enforcement action.
"The continuing trade of hazardous cosmetics in the domestic market points to the most  important role of local governments, particularly the City Mayors and the city health department chiefs, in ensuring compliance to product and chemical safety laws, including the Minamata Convention on Mercury, in their areas of jurisdiction," the EcoWaste Coalition concluded.
References:
Email Post