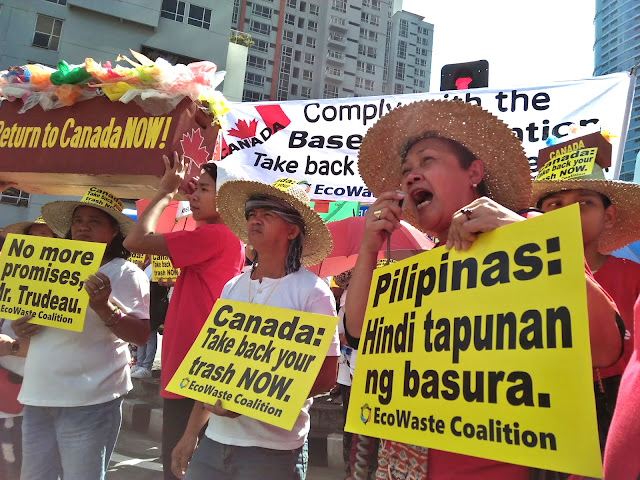 Coinciding with the third anniversary on May 30 of the historic re-exportation of the infamous Canadian garbage to its source, the EcoWaste Coalition urged President-elect Ferdinand Marcos, Jr. to institute essential policy measures to prevent dumping incidents and protect the nation's  interest from global waste trade.
"We appeal to President-elect Marcos to target the ratification of the Basel Convention Ban Amendment among his top priorities in the first 100 days of his administration to uphold environmental health and justice,” said Aileen Lucero, National Coordinator, EcoWaste Coalition, “along with a national ban on waste importation."
The Ban Amendment, adopted by the parties to the Basel Convention in 1995 prohibits the export of hazardous wastes for recycling or disposal from member states of the European Union, Organization for Economic Cooperation and Development, and Liechtenstein to all other countries. The Ban Amendment finally entered into force in December 2019.
President-elect Marcos is familiar with the issue of hazardous waste trade having filed a resolution at the 16th Congress when he was still senator “to investigate, in aid of legislation, the dumping of Canadian trash into the country, and institute measures to protect public health and environment against toxic and hazardous materials, and ensure environmentally sound waste management,” the group said.
Then Senator Marcos said “it is crucial to scrutinize the policy of the government in allowing the foreign-sourced trash into local landfills in order to assess and enhance viable mechanisms to protect our people from the health perils brought about by the gargantuan rubbish literally thrown into our own backyard, at the expense of our people.”
In the said resolution, Marcos cited the falsely declared "heterogeneous plastic scrap materials" from Canada intercepted in 2013 by the Bureau of Customs, which upon inspections made by the customs and environmental authorities were found to contain “mixed waste, consisting of non-recyclable plastics, used adult diapers, broken bottles and glasses, waste paper, household/kitchen waste, contrary to the earlier declaration that the waste materials consist of recyclable scrap.”
According to the EcoWaste Coalition, the president-elect’s ratification of the Basel Convention Ban Amendment will be a fitting honor for the late Senator Miriam Defensor Santiago who ran for President in the 2016 elections with Marcos as his running mate.
In one resolution authored by Santiago, she called for “an inquiry, in aid of legislation, on ways to decisively prevent illegal waste dumping from abroad, including the ratification of the ‘Basel Convention Ban Amendment’ and other legal measures to protect the country from becoming a global dump for hazardous waste.”
In another resolution, the late senator said “there is a need to immediately ratify the Basel Ban Amendment to prohibit the export of toxic waste from developed countries to developing countries.”
Following President Rodrigo Roa Duterte’s last State of the Nation Address (SONA) in 2021, the EcoWaste Coalition urged the chief executive anew to ratify the Basel Convention Ban Amendment, impose a comprehensive ban on foreign waste imports, and support a stronger ASEAN response to stop global waste dumping as suggested in the report titled “Waste Trade in Southeast Asia: Legal Justifications for Regional Action.”
A study commissioned by the Department of Environment and Natural Resources - Environmental Management Bureau (DENR-EMB) “has shown the overall beneficial impact of the Ban Amendment in the Philippines, where the long-term financial, environmental, and social benefits outweigh the short term-costs.”
As of this writing, the Philippine government has yet to complete the ratification procedures of the Basel Convention Ban Amendment, which will require concurrence by the Senate.
References:
Timeline of Canada’s Trash Dumping in the Philippines (2013-2019)
Email Post