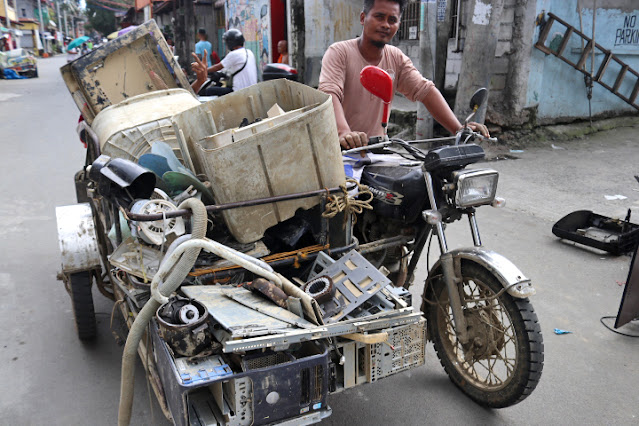 As you're eating breakfast and getting ready to brave the traffic to work, you would always faintly hear a loud call: "Sirang aircon, TV, washing machine, cpu, laptop, pati mga sirang appliances palit sa timba, batya, o tabo!" At this point, you're used to it, just like how you are used to hearing taho or balut vendors every day. However, unlike taho or balut vendors where you know what they are selling, it's improbable that you know who these people are. Additionally, it is also a mystery why they are asking for old electronics and appliances in replacement of timba, batya, or tabo.
They are the informal e-waste workers – the people on the streets pushing a heavy pedicab or kolong kolong filled with e-waste while walking under the scorching sun and continuously shouting their calls for e-waste. As their work is labor-intensive, they need to wake up at the break of dawn and start working at 7 AM. Regardless of the weather, they roam around villages, barangays, and even cities to buy and collect e-waste from households. They then barter it with new timba, batya, tabo,  or any cheap alternative. At 11AM, they travel back to their community, which is usually kilometers away from their collection sites, and prepare for the second part of their work – dismantling the e-waste they’ve collected.

Informal e-waste workers walk miles and miles pushing heavy materials the entire morning, be it through intense heat or rain. They also often experience discrimination, sexual harassment, or even physical violence on the streets as some people think of them as less. Unfortunately, most of them just endure this by thinking of it as part of the day’s work, or else, they’d end up starving due to a lack of income.

In the afternoon, they dismantle these e-wastes by separating all the materials that can be sold, breaking yoke and peeling wires to harness brass, and then throwing away parts (e.g., tube, styrofoam, wire coatings, etc.) that have no selling value. After this lengthy and dangerous process of dismantling e-waste, they sell it to junk shops, where they earn an average of PHP 300-500 per day. 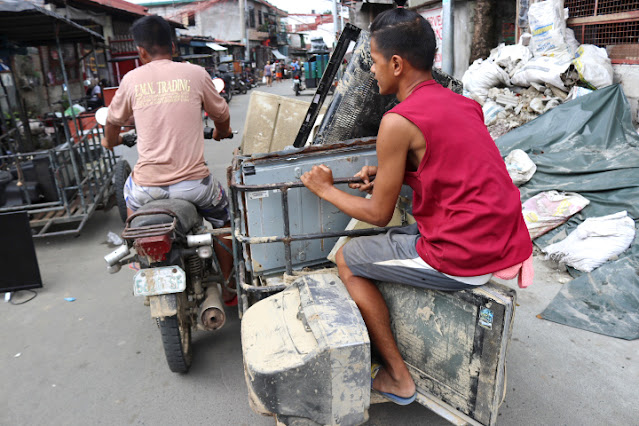 Informal e-waste workers walk miles and miles pushing heavy materials the entire morning, be it through intense heat or rain. They also often experience discrimination, sexual harassment, or even physical violence on the streets as some people think of them as less. Unfortunately, most of them just endure this by thinking of it as part of the day’s work, or else, they’d end up starving due to a lack of income.
Dismantling e-waste is also a difficult job in and of itself, especially for the worker's health. Improper dismantling of e-waste may cause the release of toxic pollutants, such as Polychlorinated Biphenyls (PCBs) and Polybrominated Diphenyl Ethers (PBDEs). PCBs, which are commonly found in electrical transformers and capacitors, are considered a "probable human carcinogen" and are also known to interfere with the hormone system, lead to reproductive system failure, and may suppress the immune system. On the other hand, PBDEs ,which are used as flame retardants in electronics, can enter the body by inhaling contaminated air or ingesting contaminated food. It can cause serious health effects on the thyroid, liver, and kidney. Women e-waste dismantlers, particularly, are more prone to the adverse effects of PBDE in WEEE as these can be transferred to unborn fetuses. 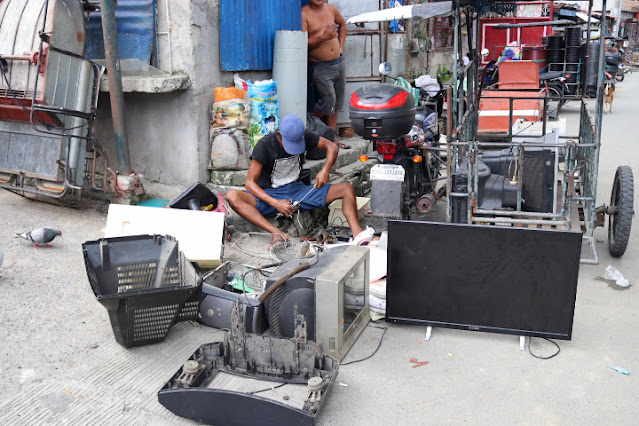 On top of this, they also often get injured during dismantling due to the sharp and heavy objects, such as screwdrivers, saws, hammers, cutters, and pliers, used for dismantling, and even the parts of the gadgets and appliances themselves are often razor-sharp, which quickly cut the unfortunate dismantler. But despite all of these health impacts, discrimination and harassment, and heavy labor, they only earn PHP 300-500 a day depending on how many they collect and how valuable the parts are.
PHP 300 is way below the minimum wage in NCR, and PHP 500 barely reaches the standard. But they do it because they have to eat, put a roof over their heads, and provide for their families. Most e-waste workers are still part of the informal sector, which means they do not receive any benefits or services for their hard work. They do not just do it for themselves but also for the country's solid waste management and the environmental state since e-wastes have severe effects on the planet.
It's essential to know the faces, struggles, and importance of the people behind these calls. It's high time for them to be formally recognized as waste workers and receive the rights, benefits, protections, and services they rightfully deserve. They are more than e-waste workers. They are also frontliners and environmental defenders whom society cannot live without. | PATRICIA NICDAO
Email Post