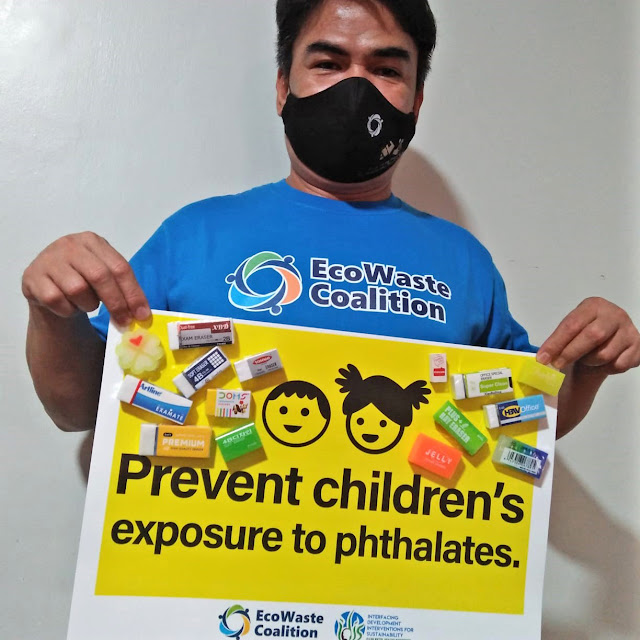 As thousands of schools brace for limited face-to-face classes amid declining COVID-19 cases in the Philippines, two non-profit groups raised the alarm over the sale of erasers containing endocrine disrupting chemicals (EDCs), particularly phthalates.
The EcoWaste Coalition and the Interfacing Development Interventions for Sustainability (IDIS) pitched for regulatory measures that will prohibit phthalates --- a group of chemicals added to soften polyvinyl chloride (PVC) plastic --- in erasers and, hopefully, in more products other than toys that are marketed for children’s use.
This developed as the groups announced the detection of large amounts of phthalates in erasers they bought from retail stores located in 11 cities and shipped to South Korea for laboratory analysis.
Children may be exposed to phthalates in erasers when they bite, chew, lick, suck or ingest parts of an eraser with phthalate additives, the groups warned,  even as they recognize other potential sources of exposure to these known EDCs in the home and school environment.
As part of the nine-country EDC elimination project, IDIS and EcoWaste partnered with the Wonjin Institute for Occupational and Environmental Health (WIOEH), with support from the Financial Industry Public Interest Foundation (FIPIF),  to determine the presence of phthalates in erasers sold in the local market and to promote regulatory reforms.
“The results of our investigation lay bare the inadequacy of current national and local regulations that protect children from being exposed to phthalates such as those in plastic erasers and the need for action to purge the market of children’s products laden with these known health-affecting endocrine disruptors,” said Lemuel Manalo, Program Coordinator, IDIS, who also urged manufacturers to provide readily available chemicals in products information to assist consumers in making a healthy and safe choice.
“A review of existing chemical safety regulations for children’s products is needed to identify policy gaps and prepare matching measures, including chemical ingredient transparency, to safeguard children from adverse exposures to EDCs,” added Manny Calonzo, Adviser, EcoWaste Coalition, who noted that past laboratory tests commissioned by the group also found high levels of phthalates in toys, backpacks and raingear made of PVC plastic.  “This indicates that children could be exposed to undisclosed phthalates in other products; hence the need for an expanded phthalate ban.”
Of the 40 samples analyzed by WIOEH, 31 (78%) were found to contain one or more phthalates such as DEHP, DBP, DiBP and DINP.  More importantly, 19 samples (48%) were found to contain phthalates in excess of the 0.1% total limit for phthalates under South Korea’s “Special Act on the Safety of Children’s Products,” which establishes standards commonly applied to children’s products, including toys and school supplies, used by or used for children under the age of 13.  The phthalate concentrations detected in the 19 samples ranged from 10.1% to 36.7%, way above the 0.1% limit.  DEHP, a probable human carcinogen (a substance that causes cancer) was detected in 30 samples (75%) with the worst sample having 31.28%.
By comparison, only one out of the 59 analyzed samples from South Korea violated the 0.1% limit for phthalates in children’s products, indicating high level of business compliance and the achievability of banning phthalates in erasers.
The group also noted that eraser samples from the Philippines labeled as “phthalate-free,” “PVC-free,” “non-PVC,” and “non-toxic” did not contain phthalates above the 0.1% limit, indicating the availability of compliant erasers in the market.
According to the report “Plastics, EDCs and Health” published by the Endocrine Society and the International Pollutants Elimination Network (IPEN), “EDCs are linked to neurological and behavioral disorders, obesity and metabolic dysfunction, reproductive disorders, and hormone-sensitive cancers,” noting that “the production and use of phthalates is a public health concern because several phthalates have been identified as EDCs.”  Experts have warned that “EDC exposure and effects can occur at very low doses, below an established regulatory threshold,” implying “there is likely no ‘safe’ dose of an EDC.”
EcoWaste and IDIS have already notified the Department of Health (DOH) and the Food and Drug Administration (FDA) about the results of their investigation on phthalates in erasers along with their recommended action points.
References:
Email Post