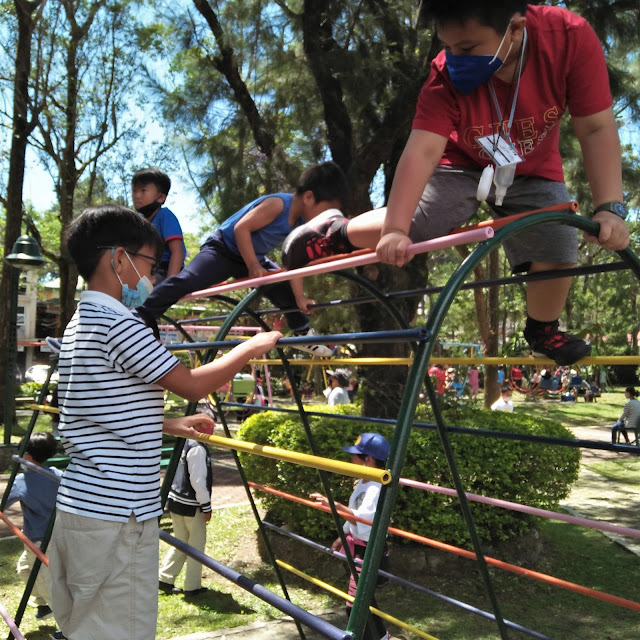 The EcoWaste Coalition, an environmental health watchdog group based in Quezon City, lauded the Baguio City Government for the completed renovation of the Children’s Playground at Burnham Park, which reopened to the public last Sunday, March 27.
“We laud the repair, repainting or replacement of the damaged and lead painted play facilities and the installation of new playsets that will not pose a threat to children’s health,” said Manny Calonzo, Adviser, EcoWaste Coalition, noting that children may be exposed to lead through contact with lead-containing dust, soil or paint chips.
“The playground closure due to the site renovations and COVID-19 restrictions is finally over and this is welcome news, especially for children who long to spend time and play outdoors,” he said, while also hailing the setting up of book reading and storytelling area in the park where kids can improve their creativity, imagination, communication and social skills. 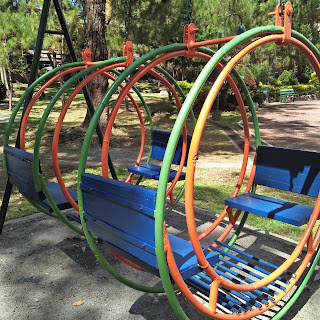 Compliant paints were used to re-coat the old see-saws, swings, monkey bars and other equipment, according to the City Environment and Parks Management Office (CEPMO), while test report obtained by the EcoWaste Coalition from Inca Philippines, Inc. (the playground equipment manufacturer) shows that cadmium, hexavalent chromium, lead and mercury were not detected on the plastic material used in the five new combination playsets.
Regular monitoring of the surface coatings of the play equipment and the safe conduct of prompt remediation will be necessary to prevent corrosion and the release of paint chips or dust, the group pointed out.
Facilities for washing hands should be installed to motivate kids to wash their hands after playing and before eating, the group suggested.
It will be recalled that the EcoWaste Coalition, with permission from the Baguio City Government, screened 17 play equipment at the Children’s Playground for lead paint in October 2019 using a handheld SciAps X-Ray Fluorescence (XRF) device.
As the group reported to Mayor Benjamin Magalong, all the 17 playground equipment contained total lead concentrations exceeding 90 parts per million (ppm), the regulatory limit set under DENR Administrative Order 2013-24, or the Chemical Control Order for Lead and Lead Compounds.
The Environmental Management Bureau (EMB) through Memorandum Circular 2016-010 reiterated the ban on paints with lead above the 90 ppm limit for decorating children’s toys and related products, including indoor and outdoor playground equipment such as playhouses, play pens, seesaws, slides and swings.
Fifteen of these 17 playground equipment were found to be coated with lead paint above 10,000 ppm, with 11 of them containing extremely high levels of lead above 100,000 ppm.  Lead paint chips were also found scattered on the ground.
“As the paint on the play equipment chips and wears with repeated use, the lead in the deteriorating paint is released, contaminating the surrounding areas,” the group informed Magalong, adding that “children playing in the park get dust or soil on their hands and ingest it through usual hand-to-mouth behavior,” the group said.
According to the World Health Organization (WHO), “when used in homes, schools, and playgrounds, lead paint can be a source of lead exposure to children, who easily ingest dust, soil or paint chips by putting their hands in their mouths.”
“Lead is especially dangerous to children’s developing brains, and can cause reduced intelligence quotient (IQ) and attention span, impaired learning ability, and increased risk of behavioral problems,” stated WHO, which also pointed out “there is no known level of lead exposure without harmful effects.”
References:
Email Post

Shree Raghuvir Industries said…
Hello good job sir,Thank you for sharing this good article, it was so good to read and very useful to update my skill as updated one.
I have like to read your post. outdoor play ground equipments
Thursday, April 14, 2022

Adventureplus Australia said…
https://adventureplus.net.au/playground-types/ninja-courses-for-schools-public-spaces
Ninja Courses are the perfect way to get children in schools and community spaces active and moving!
These Ninja Warrior style obstacle courses comprise a range of challenging activities that are fun, provide much needed physical development and are a schoolyard asset to keep children occupied.Ranging from the Urban Ninja Course for smaller budgets and areas to the larger scale Ultimate Ninja Course, adventure+ has numerous carefully configured courses suited to different sites shapes and budgets. We also can customise a course to suit your requirements.

Adventureplus Australia said…
Ninja Warrior Course
Ninja Courses are the perfect way to get children in schools and community spaces active and moving!
These Ninja Warrior style obstacle courses comprise a range of challenging activities that are fun, provide much needed physical development and are a schoolyard asset to keep children occupied.Ranging from the Urban Ninja Course for smaller budgets and areas to the larger scale Ultimate Ninja Course, adventure+ has numerous carefully configured courses suited to different sites shapes and budgets. We also can customise a course to suit your requirements.

Looking for best Open Gym Equipment?
Kidzlet Play Structures Pvt. Ltd. is one of the most renowned Open Gym Equipment manufacturers in Delhi/NCR and all over India. We provide outdoor Playground Equipment, Outdoor Fitness Equipment, Park Exercise Equipment, Children's Play Equipment, and more. To learn more, visit our website or call us now.

opengymequipment said…
This comment has been removed by the author.
Thursday, June 23, 2022

opengymequipment said…
Kidzlet Play Structures Pvt. Ltd. – one of the best *Open Gym Equipment Manufacturers* is here with some foolproof tips to help you build a safe playground. We have an excellent manufacturing unit loaded with premium quality equipment that help us design the most favourable solutions. All these quality makes us a leading *Open Park Gym Equipment Manufacturers* in Noida Delhi.
Thursday, June 23, 2022