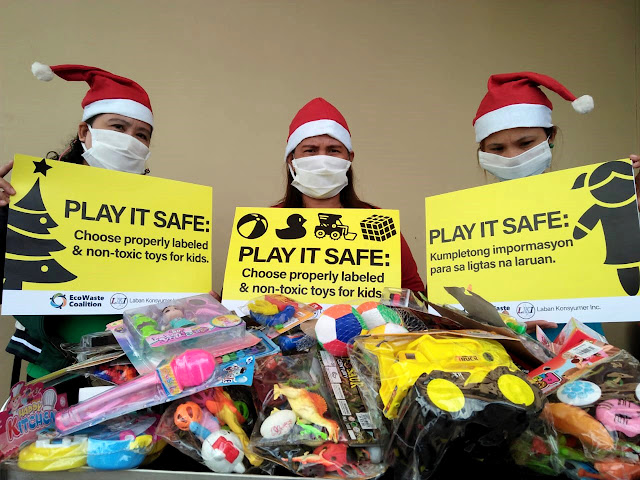 Two non-profit advocacy groups found the mandatory labeling of toys awfully wanting eight years after Republic Act 10620 was signed into law and two years after its Implementing Rules and Regulations were belatedly promulgated, prompting them to push for the effective enforcement of the law.
At a press conference held today ahead of the highly awaited Christmas gift-giving, the EcoWaste Coalition and the Laban Konsyumer Inc. revealed the poor compliance to RA 10620, or the Toy and Game Safety Labeling Act, which seeks to provide consumers with mandatory product information in line with the state policy of protecting children against potential hazards to their health and safety from play objects.
"The results of our latest toy investigation attest to the sorry state of compliance to the requirements of RA 10620 and its IRR.  It's deeply concerning that till now consumers do not have easy access to properly labeled toys as guaranteed by law.  An improper label is a red flag for probable quality and safety problems, including hidden hazards such as small parts, loose button batteries, leaded surface coatings, and endocrine disrupting substances, to cite a few," said Thony Dizon, Chemical Safety Campaigner, EcoWaste Coalition
"Compliance to the mandatory toy labeling requirements has to be improved to serve the interest of consumers.  We therefore urge the Food and Drug Administration (FDA), to take all the necessary steps to put RA 10620 into force, including informing the public about the outcome of their compliance monitoring efforts,” said Atty. Vic Dimagiba, President, Laban Konsyumer Inc.  “Complete, clear and readable labels are critical for identifying appropriate and non-hazardous toys.  Labels can also serve as tools that consumers can use in the exercise of their right to seek redressal against unfair or unsatisfactory trade practices and other grievances," he added.
As recapitulated by the FDA through Advisory No. 2020-2022, the following mandatory information must appear on the toy label: 1. License to Operate (LTO) Number issued by FDA, 2. age grading, 3. cautionary statement/warnings, 4. instructional literature, 5. manufacturer’s markings with complete name and address of the local company, and 6. item model/stock keeping unit (SKU) number.
The law also requires that the label must be generally written in English.  Otherwise, a parallel translation in English or Filipino or both must be provided.  The label must also be in a visible, easily legible, understandable and indelible form.
Following a sampling of assorted toys purchased from August to November 2021 from various retail establishments in 25 cities in Central Luzon, Calabarzon and Metro Manila, as well as from online dealers, the EcoWaste Coalition revealed that only eight (four percent) of the 209 sampled toys are fully compliant to the labeling requirements for toys.
Furthermore, the group found:
The deficient labeling information is an indication that a toy has no valid Certificate of Product Notification from the FDA and its use may pose health risks to consumers, the groups said.
The FDA has repeatedly warned “potential hazards may come from ingredients that are not allowed to be part of a toy and childcare article product,” stressing that “the use of substandard and possibly adulterated toy and childcare article product may result to health risks including, but not limited to, endocrine disruption and reproductive or development effects; or may result to injury, choking or suffocation due to its small or broken parts.”
As per RA 10620, toys and games not in conformity with the labeling and packaging requirements will be treated as “misbranded” or “banned hazardous substance” and “withdrawn from the market at the expense of the manufacturer or importer.”
Toy manufacturers, importers, distributors and retailers found in violation of RA 10620 and its IRR will be fined not less than P10,000 but not more than P50,000, or imprisoned for not less than three months but not more than two years, or both, at the discretion of the court.
References:
Additional information:
Email Post