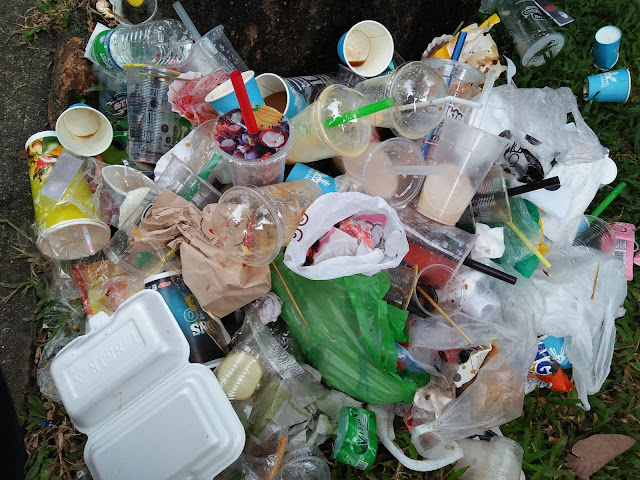 Environmental health and justice advocates welcomed the Supreme Court’s issuance of the Writ of Kalikasan and Writ of Continuing Mandamus for the government’s inaction on non-environmentally acceptable products and packaging (NEAPP) as required by Republic Act 9003, or the Ecological Solid Waste Management Act.
“We congratulate the civil society petitioners and laud the Supreme Court for its immediate action, which we believe will obligate assigned agencies to do their utmost best to release the NEAPP list that should have been issued 20 years ago,” said Aileen Lucero, National Coordinator, EcoWaste Coalition.  “It’s high time to decide on environmentally acceptable products and packaging amid the plastic waste and chemical crisis that imperils food safety and security, human health and the environment now more than ever.  This will hasten our nation's quest toward a zero waste and toxic-free circular economy."
“Environmentally acceptable,” as defined in RA 9003, pertains “to the quality of being reusable, biodegradable or compostable, recyclable and not toxic or hazardous to the environment.”
In a resolution issued on December 7, 2021, the Supreme Court resolved to issue the said writs as requested last October by 52 petitioners led by Oceana Philippines and other members of the civil society, along with former Senator Sergio Osmeña III, to compel the multi-agency National Solid Waste Management Commission (NSWMC) to implement the NEAPP provisions of RA 9003.
Section 29 of RA 9003 mandates the NSWMC to prepare a list of non-environmentally acceptable products one year after the law has taken effect, while Section 30 bans commercial establishments from selling or conveying products placed, wrapped or packaged in non-environmentally acceptable packaging after the phase-out period.
The Supreme Court’s decision was “a huge first step to change mindsets and embed the protection of our ocean. This is indeed a very special case that merits the attention and needed action from every Filipino,” said. Atty. Gloria Estenzo Ramos, Vice-President of Oceana Philippines.  “This sets a solid foundation and precedent upon which we can build our collective efforts to battle the plastic crisis that continues to threaten our natural world including our ocean, food security, livelihood and health.”
"IDIS welcomes the decision of the Supreme Court as we continue to fight against the plastic crisis.  As an NGO working towards the protection and sustainable management of the watersheds in South-Central Mindanao, we saw how plastic pollution affects our watersheds and our water sources and endangers wildlife and their habitats. IDIS, along with our partners, was successful in lobbying for the regulation of single-use plastics in Davao City," said  Atty. Mark Peñalver, Executive Director of the Davao-based Interfacing Development Interventions for Sustainability (IDIS) and one of the petitioners.
"However, without clear guidelines from the National Government, the LGUs can only do so much within its authority. Thus, this case is of significant interest in our fight against the plastic crisis as this will set a precedent to future policies especially to the LGUs," he pointed out.  "This decision by the Supreme Court reaffirms the right of the people to a balanced and healthful ecology," he added.
The Supreme Court referred the case to the Court of Appeals for acceptance of the Verified Return and Comment and for hearing, reception of evidence and rendition of judgment.
However, the Supreme Court denied the prayer for the ex-parte Temporary Environmental Protection Order (TEPO), including a plea to immediately prohibit disposable plastics and plastic products containing Bisphenol A, phthalates, and other known endocrine disrupting chemicals and persistent organic pollutants (POPs), as well as other plastic products that are non-reusable, non-biodegradable or compostable, non-recyclable, and are toxic or hazardous to the environment until the termination of the case.
Two global studies on beached and recycled plastic pellets released last December 14 by the International Pollutants Elimination Network (IPEN), which counts on the EcoWaste  Coalition and IDIS among its members, reveal the presence of toxic chemical additives and pollutants in plastics that pose multiple health threats to humans and the environment.
The health effects include causing cancer or changing hormone activity (known as endocrine disruption), which can lead to reproductive, growth, and cognitive impairment. Many of the toxic chemical additives have several other known health impacts, persist in the environment, and bioaccumulate in exposed organisms, according to the studies.
References:
Email Post