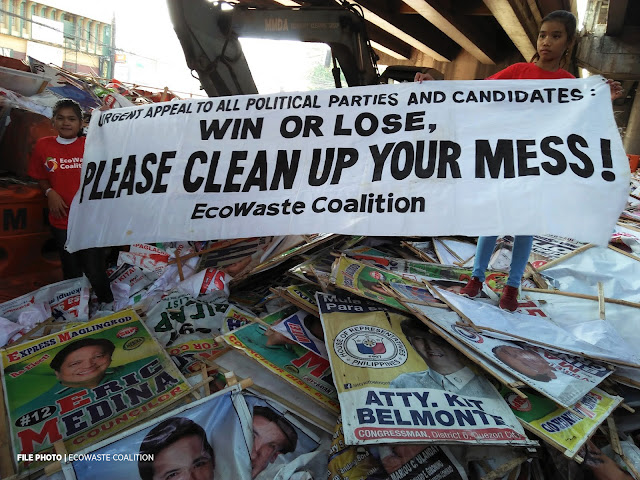 As the election fever heats up across the country, environmental groups wasted no time in urging the Commission on Elections (COMELEC) to initiate much-needed reforms toward an eco-friendly conduct of the 2022 polls.
Through a letter submitted to the office of COMELEC Chairman Sheriff M. Abas, pro-environment groups led by the EcoWaste Coalition, Mother Earth Foundation, Greenpeace Philippines, and Zero Waste Philippines appealed to the poll body “to proactively integrate waste and toxic prevention in the conduct of the upcoming elections.”
The groups, along with the Interfacing Development Interventions for Sustainability, NASSA/Caritas Philippines, Urban Poor Associates and a host of other community-based organizations, made the earnest appeal ahead of the filing period on October 1 to 8 for the Certificates of Candidacy for all elective positions, as well as the certificates of nomination and acceptance.
“Considering the problems already plaguing our society due to garbage, plastic pollution, climate change and COVID-19, we urge the COMELEC to champion much needed policies and practices that will protect our fragile environment from being further degraded by the avalanche of partisan political activities leading to the 2022 elections,” wrote Eileen Sison, President, EcoWaste Coalition.
“We hope COMELEC will commit to greening the 2022 polls to the best of its ability and with the participation and support of all stakeholders,” she said, noting the widespread disregard of environmental rules and regulations in past electoral exercises. 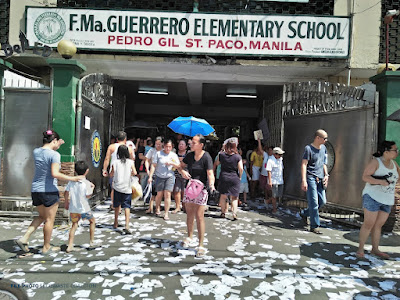 The groups identified some of the more blatant offenses in previous polls that have directly or indirectly harmed the environment, including the unrestrained plastering of campaign posters outside COMELEC-designated areas, most notoriously on trees, electric posts and walls.
The groups also scored the unbridled display of “indirect” political propaganda such as graduation and fiesta banners and tarpaulins; the unregulated noise from mobile political propaganda and during campaign meetings; the unchecked distribution and littering of sample ballots on election day; and the open burning of campaign waste materials, which is prohibited under the Clean Air Act and the Ecological Solid Waste Management Act.
“We have also observed the rampant use of campaign materials that are hardly reused or recycled, particularly plastic tarpaulins, posters and buntings, as well as the confetti thrown in miting de avance,” the groups said.
Aside from the littered sample ballots on the actual polling day, the groups also noted the use of disposable food and beverage containers inside the polling centers for the members of the Board of Election Inspectors, poll watchers and volunteers, and the lack of an ecological system for managing discards such as food leftovers and their single-use containers.
To reduce the ecological footprint of the much anticipated elections in 2022, the EcoWaste Coalition requested COMELEC to heed the following action points:
The EcoWaste Coalition will also reach out to political parties and political wannabes to encourage them to think of the environment as they ardently woo the electorate for votes.
Email Post

Arvin said…
This comment has been removed by the author.
Wednesday, November 17, 2021

Arvin said…
Good day! Since it is pandemic, and some of the campaigns were mostly done through online platforms, is there a chance that the number of election waste will decrease this May 2022 Elections? Or will it be worst than the 2016 polls? Is there a data that could show how much waste we have last 2016? And how much waste do you expect this 2022 polls will create? Thank you!