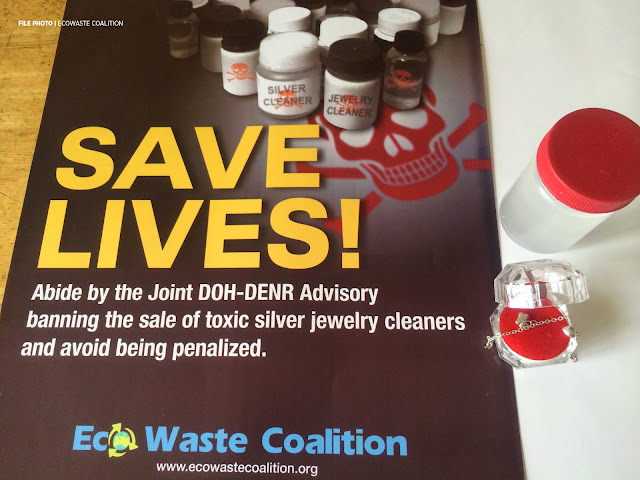 The EcoWaste Coalition today urged the public to be more vigilant in buying unregistered liquid cleaning agents for silver jewelry that may cause fatal cyanide poisoning.
“To prevent tragic poisoning incidents due to the intentional or unintentional ingestion of silver jewelry cleaners (SJCs), we urge the public not to purchase and use unregistered and unlabeled products as these may contain undisclosed amount of cyanide, a lethal poison,” said Thony Dizon, Chemical Safety Campaigner, EcoWaste Coalition.
The toxics watchdog group’s call for public vigilance to prevent cyanide poisoning coincided with the 11th anniversary of an important government advisory banning the sale of SJCs containing cyanide and other toxic substances.
Through Joint Advisory 2010-0001 issued on September 24, 2010, the Department of Health (DOH) and the Department of Environment and Natural Resources (DENR) declared SJCs containing cyanide and other harmful ingredients as a “threat to health and safety” and reaffirmed the strict ban on their sale in the market.
The unrelenting sale of unregistered SJCs offline and online prompted the Food and Drug Administration (FDA) to issue Advisory 2021-0879 last April 27 to reiterate the prohibition on SJCs containing cyanide, including their promotion and sale in e-commerce sites.
Prior to the issuance of the said advisory, the EcoWaste Coalition wrote to the FDA on September 5, 2020 to report the numerous product listings for unregistered SJCs in online shopping platforms, particularly ads for “Silver Sparkle” which the FDA had previously identified and banned for containing cyanide.
As stated in the FDA advisory, “cyanide is a highly toxic chemical which may be inhaled, absorbed through the skin or ingested (accidental or deliberate) even at small doses/concentration.”
“Exposure to cyanide may bring about any of the following signs and symptoms within minutes – dizziness, headache, nausea and vomiting, rapid breathing, rapid heart rate, restlessness and weakness or may lead to respiratory failure, loss of consciousness and possibly death, among others,” the FDA warned.
Recognizing the essential role of vigilant consumers in stopping the sale of unregistered SJCs, particularly in silver jewelry stores and in online shopping platforms, the EcoWaste Coalition appealed to the public to report such unlawful act to the FDA through ereport@fda.gov.ph, or call the hotline of the Center for Cosmetics and Household/Urban Hazardous Substances Regulation and Research (CCHUHSRR) at (02) 8857-1900 local 8107 or 8113.
Before making any purchase of SJC from offline or online retailers, the EcoWaste Coalition advised the public to verify first if the product is duly registered. This can be done by accessing the FDA Product Verification Portal at https://verification.fda.gov.ph/Home.php
In lieu of commercial SJCs, the EcoWaste Coalition further urged the public to try alternative do it yourself (DIY) ways for removing tarnish from silver jewelry such as by combining two parts of baking soda with one part water to make a non-toxic cleaning paste.
"Be extra vigilant against toxic products such as unregistered SJCs," the EcoWaste Coalition emphasized. "The life you save from cyanide poisoning may be your own or that of your beloved kin," the group concluded.