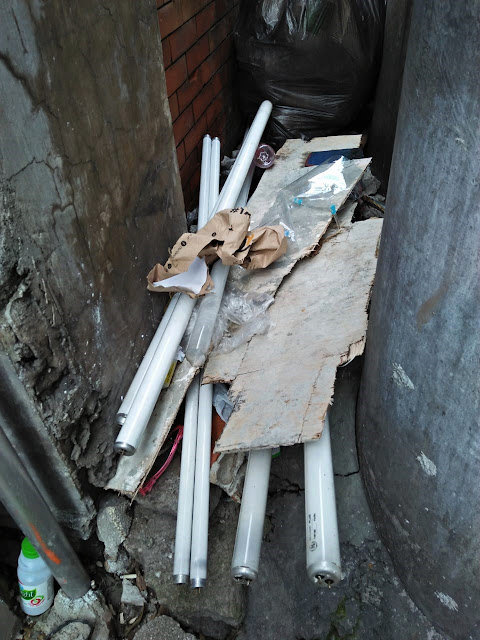 The toxics watchdog group EcoWaste Coalition has bewailed the long overdue operation of a recycling facility for fluorescent lamps, which because of their mercury content, should be handled with care and not irresponsibly disposed of.
“The facility has been gathering dust since 2014 while ordinary households, small businesses and other waste generators are at a loss as to how to safely dispose of spent fluorescent lamps,” said Thony Dizon, Chemical Safety Campaigner, EcoWaste Coalition.
“Tossing busted fluorescent bulbs on the sidewalk, mixing them with regular trash, or when they are dumped or burned, can result to the breakage of the glass tube and the subsequent release of their mercury content into the environment, which poses health risks to humans and the wildlife,” he pointed out.
In a statement, the EcoWaste Coalition implored the Department of Energy (DoE) to exhaust all means to activate the plant so it can serve the purpose for which it was bought: safely recycle spent lamps and prevent their mercury content from contaminating the environment.
The statement coincided with the fourth anniversary on August 16 of the entry into force of the Minamata Convention on Mercury, which President Rodrigo Roa Duterte ratified on June 2, 2020.
Among other things, the convention stipulates the phase-out by 2020 of certain mercury-added products including compact and linear fluorescent lamps and other types of mercury-containing lamps based on concentration limits.
To recall, DoE procured the Swedish-supplied recycling equipment for US$1.37 million as part of the Asian Development Bank-funded Philippine Energy Efficiency Project.  The department successfully conducted the pilot program in 2013-2014.
The Lamp Waste Management Facility (LWMF) as it is called consists of the following equipment: a processor for fluorescent tube lamps, a processor for high intensity discharge lamps, a batch process distiller, a drying oven and a vapor monitor.
According to the DoE, the LWMF has the capacity to treat six million lamps per year for 8-hour daily operations, retrieving 88% glass, 5% metals, 3% powders with rare earth, 0.005% mercury and 4% other materials (including resinous materials).
Recognizing the urgency to get the LWMF up and running, the EcoWaste Coalition has written to DoE a number of times to request it to operationalize the idle facility to help curb the haphazard disposal of mercury lamp waste.
According to the EcoWaste Coalition’s report titled “The Toxic Silence of the Lamps,” “the indiscriminate disposal of busted or spent fluorescent lamps as common trash is not only polluting the surroundings but is also exposing waste handlers, informal recyclers and the public to mercury, a potent neurotoxin, which can lead to acute and chronic intoxication even at low levels of exposure.”